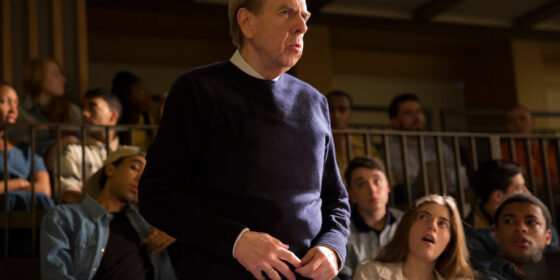 As the notorious and famously discredited Holocaust denier David Irving in Denial, Timothy Spall deadens his eyes, twitches his jowls, masticates his dialogue and scrunches himself into truly ghoulish configurations. Not since Jeremy Irons played Claus Von Bulow has a gifted English actor thrown himself so bodily into a role as a real-life rotter. It’s hard to charge this congenital over-actor with over-acting, since the person he’s playing is so self-parodically odious, and director Mick Jackson—making his first feature since the 1997 Volcano (!)—isn’t about to rein him in. Nor does he do much to help his leading lady Rachel Weisz, playing American historian Deborah Lipstadt—a professor and author who was sued by Irving for libel in the mid-’90s, leading to a sensational trial in London—overcome her own ersatz and distracting Queens accent. The spectacle of nicely pedigreed performers (including Tom Wilkinson, who probably could have played Irving even more flamboyantly than Spall) stranded in prosaic prestige dramas is all too common at this time of year (and in this section of the film festival), and while Denial is not too deadly as these things go—it takes its subject matter seriously enough—it doesn’t do justice to its intriguing dramatic conceit, which is that the outspoken Lipstadt has to keep shtum to let her lawyers do their jobs properly. A movie that stayed rigorously inside its heroine’s muzzled sense of frustration could be compelling, but Jackson keeps cutting to superfluous subplots, and practices the worst sort of dishonest, audience-baiting manipulation in the home stretch.