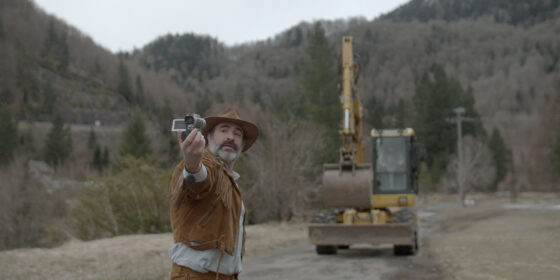 We all remember Flat Eric, the creepily expressionless yellow puppet turned music-video star, sitting at a huge office desk and bopping along to Quentin Dupieux’s international hit “Flat Beat” while signing contracts, taking phone calls, and doing all the things a businessman does. Twenty years and seven feature films later, the French director/DJ has kept the flat beat without losing his edge or humour. He strikes the perfect tone between the disturbing and the endearing in Deerskin, his most fully realized and accessible dig at the adult world to date.

The film follows Georges (Jean Dujardin), a man we soon learn has abandoned everything he had to buy the jacket of his dreams (à la Nicolas Cage in Wild at Heart). His purchase made, he lives deep in the French mountains in the middle of nowhere, doing nothing. As Dupieux builds on this already deliciously simple and absurd premise, there’s a worry that he might mess up its minimalist beauty. But he never does. The film’s endearing quality comes as much from Dujardin’s Georges, who reveals himself to be a deeply broken man, as it does from the sense that Dupieux is having the time of his life making this film exactly as he wants it, never anxious or desperate to please, never worried that he’s not doing enough.

When Georges decides to double-down on his love for his clothing and become “the only man on the planet wearing a jacket,” he sets about getting rid of all the other jackets he encounters (and their owners) by whatever means necessary. As he calmly follows the logic of his own madness, the gap between the simplicity of his desire and the severity of its consequences widens, as do the smiles on our faces. Dujardin delivers the most affecting and subtle of his recent string of similar performances, once again playing a man in total denial trying to fit some popular idea of success with the least amount of effort. It’s a memorable performance in a very funny, dark, and strangely heartwarming movie.