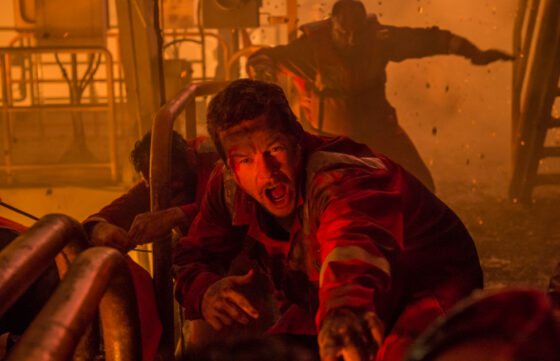 We know from the start that this baby’s gonna blow; it’s only a question of when and how abysmally.

Deepwater Horizon is everything you might expect from a Gala: it’s big, it’s bad, it has famous people. There’s bald foreshadowing involving bald men and reams of mumbled exposition from Mark Wahlberg and Kurt Russell. There are sundry supers to explain essential technical specs, such as the fact that a blowout preventer prevents blowouts. The film’s central conflict, however, is kept mind-numbingly straightforward: this is a cautionary tale of profit-fixated corporate fat cats versus honest working men and women who haplessly insist on putting safety first. Fat cat numero uno is John Malkovich, offering his most shameless Satan since Con Air (1997), with sweat stains on his pits and fangs poking out from the proscenium of his bad-guy goatee as he lords over that fateful negative pressure test.

What makes Deepwater Horizon more than just another dumb disaster movie is its astonishing failure to account for the scale of the actual disaster it’s based on. With all due respect for those who lost loved ones during the explosions, the film, for all its quasi-proletariat-championing bluster, ends exactly where it should rightly begin, with the start of an environmental catastrophe that’s poisoned extensive stretches of coastlines in two countries, destroyed countless careers, and corrupted the integrity of a vast ecosystem that our grandkids will still be trying to clean up generations from now.