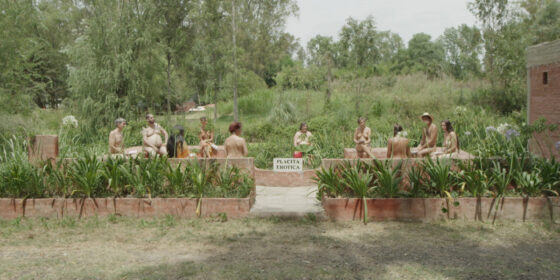 Decency, decorum, politesse, virtuous social mores—all are rigidly upheld in the gated community in Buenos Aires where Belén (Iride Mockert) finds herself gainfully employed as the live-in housekeeper for an affluent woman and her college-aged son on their huge estate. One day while cleaning, she catches a glimpse of the adjoining property over her employer’s electric fence: an upper-class nudist colony. Belén is startled but intrigued, and starts to spend more and more of her free time sneaking next door to go native with the neighbours, delighting in naked pursuits both mundane and carnal.

Though Lukas Valenta Rinner frames the nudists of A Decent Woman in Roy Anderssonian tableaus of rolling flesh, the joke is one-note. All of the film’s visual wit hinges on the inherent ridiculousness of unclothed bodies of all shapes and sizes in repose. It is fun at first, but the gag eventually wears thin. Rinner pits the cult-like nudists against their haughty neighbours in a battle of free-spiritedness vs. civility, which eventually comes to a head when Belén and her brethren give in to their baser instincts. But any stabs at class critique are hindered by the fact that the nudists are no less wealthy than their fully-clothed enemies. Freedom is easy when you have privilege. Perhaps that’s the point, but it tames the bite of this walk on the wild side.