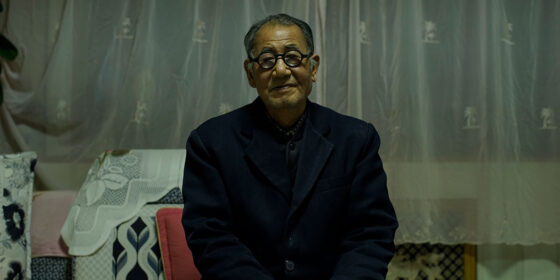 Watching Wang Bing’s Dead Souls at Cannes a few days apart from a restored screening of Safi Faye’s Fad Jal (1979), the citation by Hampâté Bâ that opened the latter felt particularly resonant, with its declaration that “In Africa, when an old man dies, it’s a library burning.” Faye’s finely observed tribute to local traditions and oral cultures is more sombrely echoed in Wang’s latest opus, which is structured around a series of testimonials from survivors of the Chinese government’s horrific activities directed at so-called “rightists” in the late ’50s. It’s a national chapter that remains largely undocumented—and with frequently skewed facts when acknowledged officially—so Wang’s decision to produce and assemble a collection of first-person accounts acts as an essential intervention, a people’s history from the ground up.

Save installation-based works like Crude Oil (2008) and 15 Hours (2017), the nearly eight-and-a-half-hour Dead Souls is Wang’s longest film since the grand West of the Tracks (2003), and in a similar fashion utilizes its extended runtime to offer a range of experiences that extends beyond the film’s limited scope. The film exists as a microcosm, representative of thousands of other similar stories that transpired during the anti-rightist actions taken against nearly half a million citizens, as well as China’s largely coterminous Great Famine. Of an estimated 3,000 individuals sent to the gulag-like Jiabiangou and Mingshui camps in the Gobi Desert from 1957 to 1961 for “re-education” that amounted to little more than forced labour and deprivation, all but approximately 500 died of starvation. In his 12 years of production for Dead Souls, Wang sought out and spoke with 120 such survivors about their experiences, with the film itself dedicated to the stories of fewer than two dozen.

While the film includes sequences shot in recent years in HD, the majority of the interviews were recorded in 2005 and 2006, with an aesthetic characterized by lo-fi digital and static compositions. Each speaker is introduced with their age alongside their name and location, with the majority being in their 80s and 90s and of varying degrees of mental and physical well-being. We see them most often seated in their apartments, domestic settings whose level of comfort offers an additional, subtle means of reading the spectrum of experiences, each marking the figures in different ways. Almost exclusively men, some are seen alone in ascetic abodes, while others are seen with wives at their side or at the edge of the frame. Tears are frequent, as is impassioned anger, but just as often we listen to individuals recite their experience with an almost ironic detachment, presumably masking a deeply buried trauma. At points, gratitude for the generosity of loved ones or fellow prisoners that were able to share minuscule amounts of grain or salt intermingles with guilt at having survived while so many others perished.

In a way, Dead Souls operates as a sort of culmination to certain points of inquiry in Wang’s work over the past 12 years, as in the interim Wang produced a number of projects that have already focused on Jiabiangou and China’s rightist purges. Most immediate is 2007’s Fengming: A Chinese Memoir, produced only two years after Dead Souls’ earliest interviews with survivors were conducted. Over the film’s three hours. the eponymous He Fengming recounts her life history, with emphasis on the years of hardship in a re-education camp. Like the majority of the individuals in Dead Souls, He maintains that the “rightist” designation was totally unfounded, and that she harboured nothing but dedication to the Party and its aims. Wang met He in preparation for The Ditch (2010), his sole narrative feature to date, which also took Jiabiangou as its subject. Though shot clandestinely with actors, the film’s visual style isn’t far removed from Wang’s documentary work, and the loosely connected scenes of work and suffering offer—along with Fengming—two different attempts to introduce a visual dimension to an underseen and underconsidered chapter in history.

A small but stirring moment in Fengming occurs nearly two-thirds in, when Wang interrupts He Fengming to ask if it’s possible to turn on a light, as the room steadily and in real time darkened from evening to night. Similar moments occur in the extended video interviews that structure Dead Souls, while elsewhere time also moves forward in swift and unforgiving leaps, as several of the interview and testimonial sequences abruptly end with a text detailing the death of the individual we’ve just come to know. “Urgent” may not be the descriptor one is quick to bestow on a 495-minute film, but unlike The Ditch, based on true stories narrated to author Yang Xianhui, and Fengming, which effectively invited He to recount episodes that had already been published in her memoirs, written records don’t exist for the lives and experiences of those we see in Dead Souls. Death, both past and anticipated, permeates the film; Wang shows the stark variances of that experience between—as per Levi—the drowned and the saved.

Such a distinction is explored in the few sequences in which Wang moves outside the domestic spaces of his subjects. Most notable is an early sequence of a burial procession for one Zhou Zhinan, who shared his personal recollections shortly before his death. Complete with a eulogy delivered by his son that speaks of his father’s death in relationship to the “dead souls” who perished at Jiabiangou and other forced labour camps, the sequence is later paralleled by scenes shot in the present-day area of the former Mingshui camp. Nearly one thousand perished in the camp, and this stretch of the desert has remained the resting place for their remains, which were unceremoniously deposited barely below the sandy surface. Somewhat akin to Wang’s rarely screened 35mm short Traces (shot 2005, released 2014), which was filmed in a similar pseudo-cemetery on the former site of the Jiabiangou camp, Wang trains his camera on the nearly 60-year-old bones that are scattered throughout the landscape, ranging from small fragments to almost wholly intact skulls, alongside small, makeshift gravestones with the inscribed names of the victims.

Responses to Dead Souls have invoked comparisons with Claude Lanzmann’s monumental Shoah (1985), because of, length aside, certain shared techniques and reflexive questions at play in the two works. In Shoah Lanzmann eschews archival footage, instead focusing on the present-day voices, faces, and landscapes as a form of historical palimpsest. Wang has expressed his admiration for Lanzmann’s masterwork, and here enacts a similar gesture as he focuses on the contemporary lives of the individuals, not simply in lieu of archival material (of which there is precious little), but to counteract an absence, a hole in history. Likewise, the decision to focus on the current lives of survivors offers a cumulative portrait—not simply the years in the labour camps but also the following two decades as political pariahs, before the government’s pardoning of most accused rightists in 1978. Such an effort to trace the lingering scars of memory is more obvious in the film’s original title: Past in the Present. In a 2012 director’s statement for the film Wang notes: “If we were to focus only on narrating past events, the survivors would become nothing more than talking heads, alienating the audience from the events being described onscreen. Because we exist in a different time frame, we cannot rely solely upon our imaginations to return us to the past, or to bridge the gap between past and present truths.” With Dead Souls such a gap may not be wholly overcome—and in fact grows increasingly distant with each passing year—but the achievement of this immense and elegiac work is monumental in every sense.