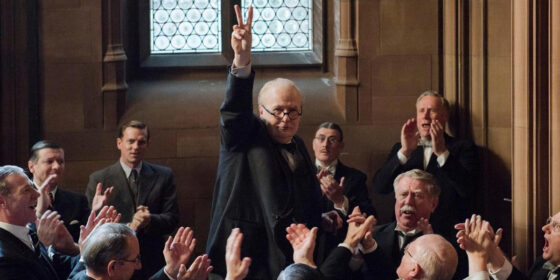 A parliamentary drama of considerable pallor (not power), Darkest Hour drops us in on the “action” of the House of Commons floor as the “Phoney War” with Nazi Germany is about to become all too real, and where Winston Churchill’s appointment to wartime prime minister is met with a frenzy of handbill-waving and a surfeit of doubt channelled in the collective reaction shots among the powers that be. We know the historical record, of course, but Darkest Hour tasks itself with revealing the prescience—counter to the prevailing political wisdom of the time—with which the grandiloquent PM anticipated and subsequently resisted the German invasion of France. How better to locate such counterintuitive heroics than through a retroactive contextualizing of Churchill as a least-likely-to-succeed buffoon (albeit with a gift for rhetoric)? Cue Gary Oldman as Oscar bait, unrecognizable as the bumbling but dignified Churchill, bloated on scotch and bacon, who will nevertheless become the chief architect of British resistance. The unflattering but ultimately aggrandizing portrait is afforded by a view from the margins, that of Churchill’s doe-eyed typist (Lily James), who serves as the administrator to this unsuspectingly effective oracle while also acting as a get-out-of-jail-free card against charges that the film is enshrining aging-white-male hegemony.

The film apportions the wages of war more to the bathtub than the battlefield, an act of evasion that could paradoxically elicit a delayed political sting if it didn’t instead augur a loaded sequence in which a naïve Churchill must stoop to riding the London Underground, where he discovers that the catalytic “voice” of the people can be heard within the duration of a mere station stop. Whether such biopic theatricality is considered victorious or merely up-your-bum will depend on where you’re coming from, Anglophile or cinephile alike.