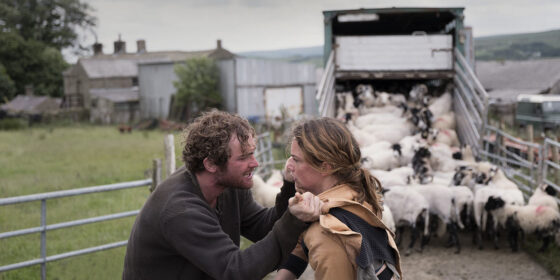 The places you’ve lived are like the people you’ve loved: you can leave them all you want but they’ll never be gone. The inextricability of space and emotion, the way we infuse familiar places with the ghosts of our memories, is at the core of Dark River, a grim tale that explores the subtle differences between coming back and coming home. Clio Barnard’s film concerns its protagonist’s physical return to her family’s farm, but insinuates a certain reluctance to rummage through the sentimental landscape embedded under its creaking and decaying surface.

From the outside looking in, Alice’s (Ruth Wilson) return is transactional, law-abiding, and the kind of business a dutiful daughter and sister would do—but on the inside is a pool of undisclosed pain and resentment on the verge of overflowing. They say trauma comes in twos: the first time is the actual event, whereas the second is a simulacrum of that violence—a vivid reopening of the emotional wound, which in Alice’s case is triggered by the physical state of being there (again).

However, despite the potential in Barnard’s thematic setup and Wilson’s fine performance, Dark River ultimately amounts to less than the sum of its parts, weighed down by its unfocused style and unevenly paced narrative reveal. The mishandled flashbacks and cheaply shocking apparitions seem to be at odds with the film’s more nuanced sensibilities; the combination of slow and artful camerawork with messy, lukewarm thrills doesn’t work in this case, culminating in a less than gratifying—not to mention unnecessarily drastic—finale. Like Alice herself, the film attempts to cover grounds too extensive and discordant to harmonize.