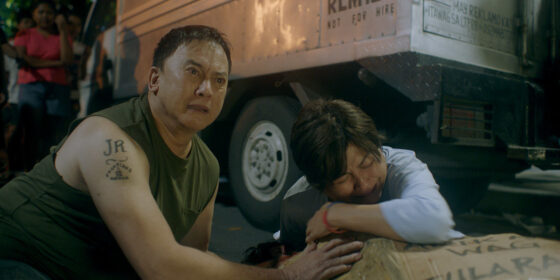 Dark is the Night is unmistakably a cri de coeur regarding the fascist leadership of Philippine strongman Rodrigo Duterte and his extrajudicial drug war. At the same time, Adolfo Alix, Jr. has chosen to convey this most urgent of messages in a highly unusual format, making his film a rather strange specimen of protest cinema. After beginning with a birthday party that is disrupted by police gunning down an unarmed drug suspect in the street, Dark is the Night sets its sights on a middle-aged couple who are working to leave the drug trade. Sarah (Gina Alajar) has been a local connection for quite some time, sewing meth into the fabric scraps she sells as her “straight” job. Her husband Lando (Phillip Salvador) backs Sarah up, but tends to leave the business to her. One day, their teenage son Alan (Felix Roco) goes missing, which is particularly troubling because Sarah and Lando know he is an addict.

After jumpstarting his film in an exaggerated, telenovela style, Alix settles in for an extended, almost Beckettian middle section, wherein Sarah wanders all over her Manila neighbourhood trying to find her son, checking in with her former drug-kingpin boss Kidlat (Elizabeth Oropesa), the corrupt police captain who protects her (Bembol Roco), and countless others. The entire central conceit of the film until the final 15 minutes is a slow, arduous, and mostly fruitless search for Alan; it is only at the conclusion that Alix returns, with a vengeance, to the brash, exclamatory mode of the beginning. The voice of Duterte is a constant throughout on the soundtrack, and it could be that Alix did not want to distract from the cretin’s words with something as fraudulent as a dramatic arc. Nevertheless, Dark is the Night is a bit of a Rorschach test. It may strike some viewers as an expression of political emergency so desperate that Alix could barely take the time to build a film around it. But instead, I choose to see it as an allegory for its own subject, a nation disoriented by a strongman intent on punctuating a constant, indistinct dread with sharp jabs of ultraviolence.