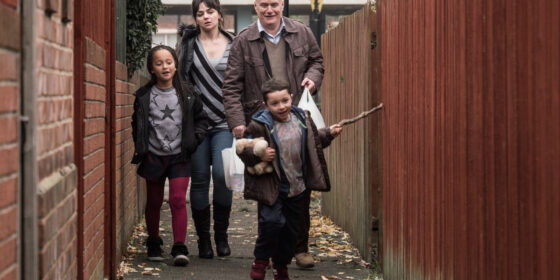 Not that anyone cares at this point, but this year’s Palme d’Or went to probably the best film of Cannes’ sorry lot of award winners—and when we’re talking about Ken Loach, you know that lot is pretty sorry. The first questioner at the jury press conference hit the nail on the head with a question re: I, Daniel Blake: namely, if somehow the lavish surroundings of the Riviera had made an impact on how they viewed a film made by an unrepentant Trotskyite that attacks British austerity practices and an impenetrable, nightmarish Orwellian bureaucracy with a meritorious emotion. (Sure as hell did for me.) This point was brushed away by peeved jury member Donald Sutherland, because after all films are rarely seen by sheltered actors in their social or political context.

But it’s hard to consider Loach’s film—probably one of his best in the baker’s dozen for what it’s worth, thanks to a vital topic and an above-average script from Paul Laverty—in a vacuum, nor does he want it to be seen that way. Laverty has crafted an irresistible lead character in Daniel Blake, a 59-year-old widowed tradesman who, after suffering a heart attack, is, despite his doctor’s diagnosis, dumbfoundingly typed by a health-care professional as “fit to work,” and needs to attempt to find a job to continue to receive government benefits. (This involves learning to use a computer, leading to assorted old-man shenanigans that threaten to derail the good will Loach and Laverty earn.) An ideal Loachian working-class hero, Daniel possesses a good nature and generosity that extends to all around him, including Katie (Hayley Squires), a struggling single mother of two uprooted to Newcastle from London, whom he befriends after witnessing her screaming altercation with a government worker in a job centre who won’t seat her for an appointment as she’s arrived ten minutes late. The most excruciating, borderline horrific scene in I, Daniel Blake (and the best thing 2017 jury president Loach has staged in quite some time) finds Katie, distraught by hunger, breaking down in a food bank, opening a tin of sauce, and shovelling it into her mouth with her hands, with a plangent mixture of desperation and embarrassment.