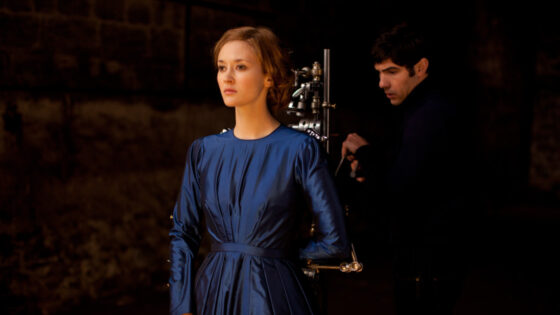 Everybody wants to go to Paris, even Kurosawa Kiyoshi. Usually, these ventures to France by non-French directors in order to make French movies result in seriously messy omelettes. (Asghar Farhadi, anyone?) Kurosawa’s Daguerrotype is certainly a mess, though it’s easy to surmise why he was attracted to bring his interest in ghosts, phantoms, and psychological displacement to cinema’s birthplace. At the story’s core is a naturally cinematic subject: a veteran photographer named Stephane (Olivier Gourmet) is obsessed with the 19th-century, French-invented process of the daguerreotype, which involves a huge-format camera and requires enormously long light exposures that compel subjects to remain still for over an hour. The resulting life-size images were felt by some to carry a ghost, a concept that the movie carries out to predictable conclusions.

This notion of the medium containing its own ghost is an extension of the gimmick running through many recent J-horror projects in which ghosts are in the machine, usually video. Kurosawa’s script, co-written with French collaborators Eleonore Mahmoudian and Catherine
Paille, also plays off of the kaidan genre in Noh theatre in which the ghost appears to exact vengeance. All of this sounds terrific.

Things start falling apart soon enough, as Gourmet’s Stephane proves to be so whiny, despairing and inhuman—an especially bitter and phony depiction of the artist as monster—that his demise can’t come soon enough. The mechanics of getting to his sealed tragic fate are
incredible in the extreme, as his new assistant Jean (Tahar Rahim) is hired 1) for his total lack of experience, and 2) then pegged by a greedy property buyer as just the guy to facilitate Stephane selling off his large, crumbling estate. In an odd storytelling fumble by Kurosawa, the viewer is far ahead of the characters, and the final act of revenge is bloodless and inert.