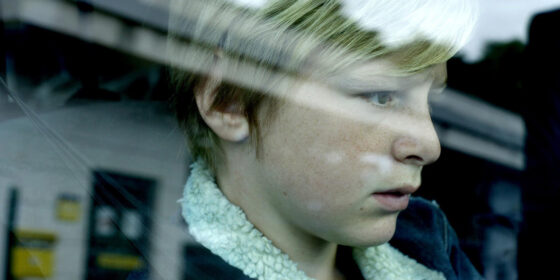 There’s something promising in the nearly 15-minute passage that opens Xavier Legrand’s Custody, which charts a hearing between a divorced couple regarding custody of their 11-year-old son, the mouthpiece avatars of their respective lawyers going off while the idly waiting, pained-looking parents sit in silence. So boldly dry with its ping-ponging legal platitudes and shot-reverse-shot direction, it suggests a procedural approach to divorce melodrama. Sadly, Custody soon becomes conventionally dull once the child, Julien (Thomas Gioria), actually comes into the picture. Put under the shared custody of his parents due to his father’s good behaviour in court, he’s soon emotionally terrorized by the patriarch during his allotted visitation time, as Dad is still bitter over his wife and 18-year-old daughter’s abandonment of him. Julien becomes unwillingly sucked into his father’s emotional vortex, which seems like it might be leading towards an unfortunate resolution for his mother Miriam (Lea Drucker).

As pater Antoine, Denis Menochet gives a strong physical performance that suggests a French Tom Sizemore (circa Heat, rather than his shrunken, wimpy Twin Peaks persona), but it’s tiring to see another film in which bad parenting is simply represented as over-the-top emotional abuse. This is not the sole dramatic strand of the film, however: Legrand also manages to donate a subplot to Julien’s sister Josephine (Mathilde Auneveux) and her love life. While in places you can see the film Legrand is trying to make—a domestic mosaic of sorts—in the end, Custody comes off as far too formulaic and vague. It’s a case where a film’s thankfully short 90 minutes feels less like a precise selection of scenes and more like a lack of sustainable drama.