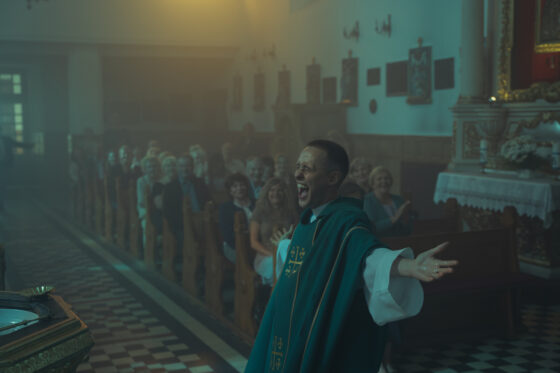 Jan Komasa does redemption à la Paul Schrader in this tale of the sacred and the profane, which follows a 20-year-old ex-con, Daniel (Bartosz Bielenia), who poses as a priest in a small Polish town. While some presumably symbolic moments (a burning pyre, a climactic disrobing) register as self-administered profundity, Corpus Christi gets a lot of mileage out of its central hidden-identity conceit to suspenseful and generally intriguing results.

Sent to work in the sawmills after a stint in juvie, Daniel, through some deception and good timing, instead ends up installed at the local parish as the visiting “Father Tomasz,” whose duties he proves miraculously well-equipped to handle, moving churchgoers with his down-to-earth sermons and gaining admirers through his active community involvement. But temptation and the ever-looming threat of discovery keeps things tense, especially as Daniel complicates his own position by stoking the fires of a divisive community tragedy.

Komasa realizes it’s as easy to pigeonhole a jailbird as it is a man of God, and pits those assumptions against each other. But it’s mostly due to the excellent Bielenia that the film builds such a degree of pathos, moving beyond stale stereotypes (the bad-boy clergyman, the  holy inmate) to become a character study of a disaffected young person navigating defunct and politicized institutions. As gentle and passionately empathetic as he is wearing a clerical collar, Daniel is just as potentially crude and violent, and Bielenia’s androgynous appearance lends a physical parallel to his character’s moral ambiguity. Shot in anemic greys, blues, and greens, the film creates a visual continuity between the insular village and its emotionally stunted inhabitants and the barbarism of a youth detention centre, singling out the yearning for community and the methods of survival in a broken Polish society as the story’s emotional backbone.