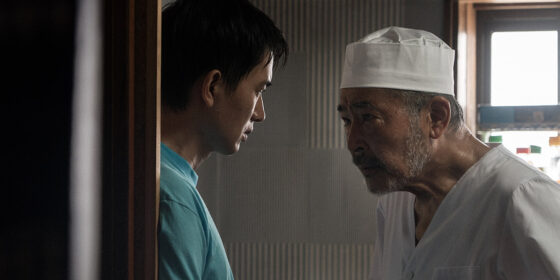 Shot in a coldly minimal documentary style, complete with shaky camera, Complicity opens with a group of Chinese illegal immigrants in Japan stealing machinery at night to buy ID cards. The look of the film connotes a certain energy: distant, cerebral, utilitarian. Despite its aesthetic, Kei Chikaura’s debut feature is anything but.

The film focuses on Chen Liang (Lu Yulai), a Chinese man working illegally in Japan to bring home money to his family. After purchasing a fake ID, he is accidentally sent a job opening at a countryside soba restaurant, run by an aging chef (Tatsuya Fuji, of In the Realm of the Senses) and his family. Chen Liang pretends to be the man on his ID, forming a close bond with the chef (who becomes known to him as otosan, or “dad”), who protects him from law enforcement and deportation. As Chen Liang forges a life for himself (a found family, a profession, and even a romance), cultural barriers are broken down in the name of love and compassion.

Complicity is an almost mawkish film, but its sentiment works. Moments which could be tastelessly melodramatic, or even emotionally manipulative (when Chen Liang and his crush sing the same pop song in their respective languages, or when he and his soba-father cry tears of joy over the idea of opening a new restaurant together), manage to hit the right chord despite themselves. It is difficult to forget how contrived and saccharine these scenes are, but that doesn’t prevent one from feeling the swell of emotions which Kei Chikaura has orchestrated. While the aesthetic of the film feels annoyingly at odds with its heartwarming melodrama, Complicity works, conjuring Hallmark emotions which are nonetheless genuinely moving.