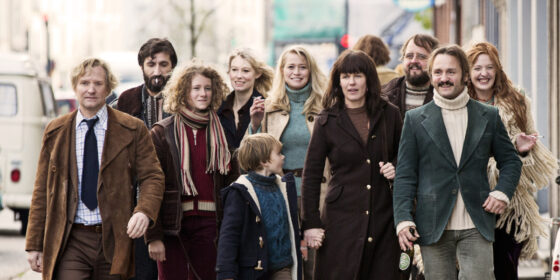 In his Danish films, director Thomas Vinterberg prefers to turn his attention to more personal (and sociopolitical) matters than in his international productions. After The Celebration (1998) and The Hunt (2012), the ’70s-set drama The Commune, originally conceived as a theatre play that premiered at Vienna’s Akademietheater in 2011, is another examination of a liberal ideology being challenged by hypocrisy and double standards of its followers—a delicacy of Danish or even Scandinavian cinema as a whole.

Vinterberg, who spent his own childhood in a Danish collective, recounts the story of middle-aged couple Anna (Trine Dyrholm), a successful news anchor, and Erik (Ulrich Thomsen), an architect, who—seeking to dispel the ennui of their long marriage— decide to open up their inherited villa and engage in communal living, less as a realization of a bohemian ideal than as a social experiment. The comedic experience of a shared home space with exhausting discussions and communal dinners eventually gives way to melodrama. Erik enters into an affair with one of his students, Emma (Helene Reingaard Neumann), and falls in love. After Anna finds out about Erik’s infidelity, the incident becomes the ultimate test case for the concept of tolerance and personal freedom in the commune, and the dumped wife suggests that the younger woman move in as well.

Vinterberg turns the film’s main attention to the suppressed suffering of a woman under the influence (Cassavetes’ riveting classic is in more than one way the reference point here). Although Dyrholm’s exceptional performance—she was awarded Best Actress at the Berlinale—adds subtlety to the increasing turmoil in a house with too many spectators, Vinterberg’s focus blurs in dealing with the additional characters, who seem too functional in their behaviour. A side plot about a seriously ill boy is mainly used to underline the film’s agenda of portraying the end of an era, away from the spirit of solidarity of the ’70s and toward the self-absorbed ’80s. At least Vinterberg is not nostalgic about the past, but rather wistful—sooner or later we all betray our romantic selves of the past.