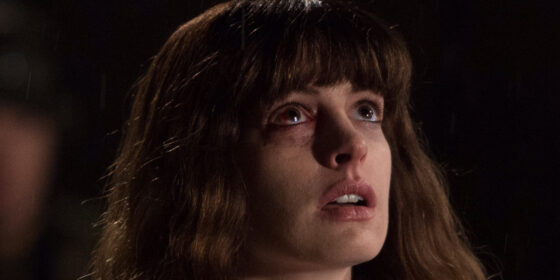 Nacho Vigalondo’s discombobulating rom-com monster movie occupies an awkward middle ground. Neither committing to its darker undertones nor giving itself over to unhinged absurdity, the film shifts between an ironic and forthright treatment of its preposterous concept: that thirtysomething alcoholic Gloria (Anne Hathaway) is responsible for unpredictable monster sightings and attacks in Seoul. After Gloria’s boyfriend uproots her from their apartment due to her drinking, she moves into her deserted childhood home and runs into Oscar (Jason Sudeikis), a friend from elementary school who owns the local bar, and who graciously offers her a job. Following a night of drinking, Gloria stumbles into a park and later notices a parallel between her intoxicated flailing and the monster that is destroying a metropolis half a world away. And as it turns out, she’s right: the playground is a kind of portal into the monster’s shoes, which gives Gloria power, purpose and responsibility. Vigalondo’s tone winks more than plays things straight, thereby undermining his characters, the film’s stakes, and any genuine emotion he might have been able to conjure up. The film is situated in a no man’s land between Charlie Kaufman’s poignancy-by-way-of-surreality and a distant, purely comedic approach. Despite its overcompensating title, Colossal is characterized by this quintessential lack.