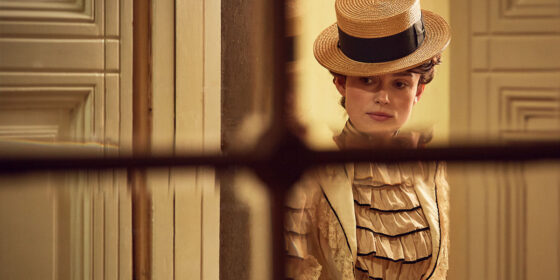 The unrefined Gabrielle Sidonie becomes the controversial author Colette (Keira Knightley) in Still Alice director Wash Westmoreland’s latest melodrama. The biopic, based on the writer’s early years, tonally and visually manages to balance the feverish luxury of belle époque Paris with a sophisticated gravity and absurdly frenzied emotions with beautifully subdued sensuality. Yet despite being an undeniably well-crafted film, Colette nevertheless fails its subject.

We watch as the persona of Colette is moulded by Gabrielle’s husband Willy (Dominic West), who helps to create “Colette” even more than his wife does, prompting her to start writing in the first place; when her first novel is complete, his editorial guidance ensures its publication and success. He also effectively develops her sexuality, permitting her to start her first affair with another woman, correct in his assumption that it will provide fodder for future novels (as well as his own masturbatory fantasies). He determines her look, her public persona, and her career trajectory. And when she finally leaves him, he is still the driving force in her life: had he not treated her so badly (and fostered her career as a playwright), she would have neither the motive nor the means to depart.

As played by West, Willy is made the fool in the easiest ways possible: he whines, he farts, he’s impotent. But this is not the intelligent critique of patriarchal structures the film proposes. Colette postures in its simplistic feminism: despite viewing Willy as a fool, his narcissistic, regressive misogyny is given more space than Gabrielle/Colette’s own talents. Telling only half her story, Colette’s Colette never becomes the artist onscreen that she was historically. What the film deems valuable is a depiction of one of the most eminent French authors as a struggling girl who barely realizes her lack of agency. Colette is a great film, but it should have been called Willy; he’s depicted as more important than her, anyway.