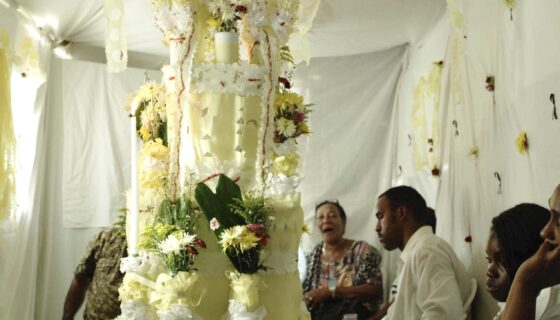 Rare is the feature film from the Dominican Republic, for sure, but even rarer is a film like Cocote. Nelson Carlo de Los Santos Arias’ fascinating opus, made under the dual sign of Glauber Rocha and Roberto Bolaño, begins in Santo Domingo, where Alberto works as a private gardener. Alberto learns his father has died—killed, actually, by a powerful man from his hometown—and he crosses the country to participate, against his will (as he’s evangelical), in the death rituals of Los Mysterios, a mix of Catholicism and West African beliefs. While home, he must also deal with his family’s desire for revenge, which he likewise rejects, though it’s impossible for him to stay neutral for long. Intuitively shot with little regard for aesthetic cohesion (which for sure will be off-putting to some), Cocote constantly shifts between different film stocks (including moving from colour to black and white) and camera styles (360-degree pans, ultra-long takes), while scenes are one minute ethnographic documentary ritual recordings, and the next pure fiction acted by a mix of nonprofessionals and professionals dutifully trained by the director to act like nonprofessionals. Somehow, this all works swimmingly—not to mention the inserts of TV news features on wild local animal tales—and the dynamic montage lives up to de Los Santos Arias’ professed aim at a new kind of “mulatto” filmmaking, something highly grounded in the Dominican ethos.