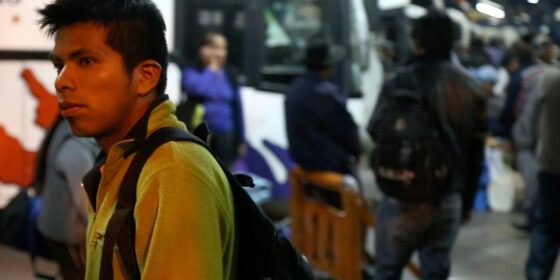 There’s a scene early on in Cocaine Prison where we see several of the little brothers of Deisy Torrez, one of the film’s main subjects, rolling around in dried coca leaves, playing in the foliage like so many New Englanders have at the height of autumn. This is beautiful and sad, since it shows just how normalized the production of cocaine is in Bolivia, and how for most poor families coca farming and low-level trafficking are the most logical means of survival. Deisy and her brother Hernan are both in high school. She wants to be an engineer; he wants to play music. But school fees are a burden, and Hernan wants a new, professional drum kit. So he agrees to mule two kilos across the Argentinean border, where he gets nicked.

The heart of Cocaine Prison is a look at Bolivia’s monstrous San Sebastian prison, an overcrowded, open-air slum that is essentially run by the inmates. A cell is not guaranteed; you need money to buy one, or else you sleep outside, subject to all manner of dangers. Due to a collapsing criminal justice system, people arrested for drug crimes can be held for nearly three years before even having an arraignment. Suffice to say, many young men enter San Sebastian and never get out, whether or not they’ve even been formally charged. Ayala and her small team managed to get a look inside the place by surreptitiously distributing cameras among the inmates, allowing the prisoners the opportunity for counter-surveillance against the state’s clear abuses. And by the end, there is a glimmer of hope that situations like Hernan’s will be rectified. But there’s no letting up on the failed drug war, or the constant tendency to punish foot soldiers when the kingpins remain untouchable.