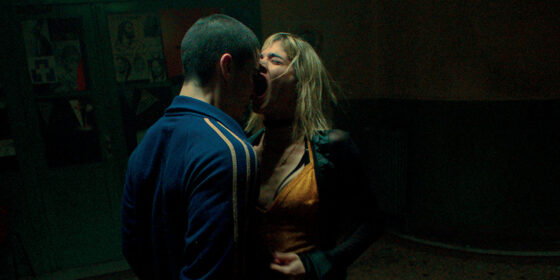 Ahead of Climax’s Quinzaine premiere, Gaspar Noé unveiled the movie’s hilariously boneheaded, almost exclusively text-based one-sheet: a rundown of his filmography, with each entry accompanied by a variation of presumed (not without reason) audience vitriol, capped off with an invitation (complete with a rendering of Noé mischievously grinning): “Now try Climax.” If the Argentine-born, French director’s fifth feature was, in fact, intended to provoke outrage—in addition to the poster, his comments to the press seem to indicate as much—then he failed spectacularly, having created his most broadly acclaimed work to date and winning the Directors’ Fortnight’s Art Cinema Award in the process.

Which is not to say that Climax, which transpires across a one-night timeline that covers a dance rehearsal and after-party, doesn’t contain ample ammunition for those who find Noé a misanthropic, self-aggrandizing bore. It is, after all, a film that involves a pregnant woman being repeatedly kicked in the stomach, intimations and consummations of incest, and an extended joke featuring a toddler locked in a live-wire electrical closet, among other ostensible offenses. But here, as in fellow self-styled provocateur Darren Aronofsky’s mother! (2017)—another hellish, single-location descent more resonant on the level of kinesthetics than metaphorical thematics—the director’s technical bona fides, impishly tasteless humour, and predilection for shock effects are channelled into the most liberating, intensely physical filmmaking of his career. Made from a page-long outline and shot in just over a fortnight, Climax feels possessed by an almost occult energy, navigating far beyond its narrative particulars to locate drug-fuelled arenas, sensorially overwhelming and flush with the agonies and ecstasies of a particularly bad trip. Call it A Season in Hell.

First, a blank canvas. The year is 1996, with France still reeling from Mathieu Kassovitz’s La Haine and cresting in anticipation of Daft Punk’s Homework. An aerial shot of pure white picks up on a woman crawling in the snow, leaving a trail of blood floating in a colourless void over which the closing credits then roll, claiming that the film is based on real events. From there, the frame glitches, taking us back to the “beginning” to play a series of audition interviews with about two dozen ethnically diverse dancers (all non-actors, apart from Sofia Boutella), who speak frankly about their professional, personal, and sexual experiences and aspirations. All this is shown on a colour CRT television framed by stacks of books (a mix of philosophy, including Nietzsche’s Beyond Good and Evil, and film theory texts) and VHS tapes—Suspiria (1977) and Possession (1981) stand out as two of the most relevant—which presumably constitute Noé’s personal canon and also serve as pre-emptive annotations of the cinematic assault to come.

Noé’s cinema has always had a streak of nihilism, and no less so here. “Life is a collective impossibility,” declares some bombastic onscreen text, one of three shards of Noé-esque wisdom dropped across the 95-minute runtime. (The other two precious aperçus: “Birth is a unique opportunity” and, upside down, “Death is an extraordinary experience.” If nothing else, Noé’s deployment of these visual typographics demonstrates a comic timing that even detractors would be hard-pressed to deny.) But what sets Climax apart is that, although it opts for an apocalyptic trajectory, it frequently dissolves the borders between pleasure and pain, and heightens the primacy of sensation to such a degree that any hint of moralism is rendered immaterial; its primary evocation isn’t the past, but an intense now. The first dance sequence—a rapturous, densely choreographed, borderline orgiastic number—sets the aesthetic template in that regard. The camera circles and cranes around the dance hall, unblinking, as if to suggest a kind of objective hyper-consciousness. Choreographed by Nina McNeely, the dancers krump, vogue, and waack in ecstatic abandon, their movements recalling Jennie Livingston’s radical documentary of New York’s “house” and ball culture Paris Is Burning (1990), a queer touchstone whose impact has since filtered into the larger culture. That the camera, here, first pulls back from a glittering French flag is but a serendipitous detail.

From that first movement, Climax segues into a series of unfussy medium two-shots that pair up various members of the cast. Heavily improvised—or else just convincingly libidinous—conversations pile up, graphing out a dense network of desire (or antagonism) among the dancers, and creating an irresolvable matrix of primal passions and animalistic urges. Lust and passion are fluid, mutable, and therefore liberated, yet not without a pernicious tinge, the possibility of anarchic disaster. These tensions charge the series of dancers’ solos that constitute the second performance segment: a top-down shot of bodies—often queer ones—lunging in and out of the screen, twisting, writhing, and spinning with hypnotic persistence, which registers almost as physically willed autoscopy. It’s so strikingly staged, so canny in its choice of perspective that, especially given the stereoscopic proscenium-staging of Love (2015), it’s hard not to imagine the dancers’ shifting volumes rendered in 3D.

All that leads, finally, to the sangria (also the title of a new Thomas Bangalter contribution on the otherwise exclusively ’90s soundtrack). Mysteriously spiked with LSD, the drink induces a kind of collective psychosis, shifting the overall tone from celebratory to paranoiac and launching the film into its most sustained passage of disquiet: a veritable ride through a funhouse of horrors that’s as thrilling as it is numbing and (amusingly) crass. The lighting shifts to infernal reds and ghastly greens; cinematographer Benoît Debie’s camera floats up and down decrepit stairwells and claustrophobic corridors. Anarchic details, shocks, and spectacles (a flaming head; a hallucinatory freak-out straight from Possession) continually leap into the relentlessly mobile frame, further destabilizing our perceptive faculties until all memory of the opening void is erased, replaced by the general impression of a Bosch-like canvas of bodies writhing and decaying, slathered by dizzying arrays of demonic light and abyssal shadow.

Throughout, there’s a loose romantic thread involving Selva (Boutella) and David (Romain Guillermic, the Noé-like figure of the group), which the latter attempts to cling onto once the debauched descent begins in earnest—a narrative line that some might take as evidence of Noé’s conservative streak. (Charges of transphobia and homophobia in past films are not without merit.) But as in Love, the depiction of such normative impulses—that is, towards heterosexual monogamy, childbearing, and the nuclear family, here underlined by the presence of a toddler—is less an assertion of values than an attempt to negotiate the pluralities of existence and the contradictions of simply participating in society (“collective” being the inescapable, non-negotiable impossibility of life in Noé’s worldview). On the most fundamental level, then, Climax would seem to be about creating (and recreating) an area of liberation, complete and total, with the knowledge that all goes to hell eventually—a distinctly Noé-esque preoccupation (“Time destroys everything”), and perhaps why he recycles broad structural trajectories from film to film.

But to locate the actual resonance of Climax, it’s necessary to return to the almost two dozen dancers, scouted from voguing balls, krump battles, and personal online platforms—arenas of self-expression, if not genuine discourse, explicitly built on asserting a presence, on (re-)creating, each time, a space where individuality can fully exist—who are here given the freedom to improvise and move with an unfettered sense of being. So if Noé’s film can in any way be considered radical, it’s in its creation of a liminal space where movement, colour, light, and texture take precedence over established narratives and conventional (especially sexual) politics, and where realms of affect transcend, for a time, the very limitations of a body. And if that remains inadequate, one can always set the stage aflame and start anew. Paris has burned, and it will burn again.