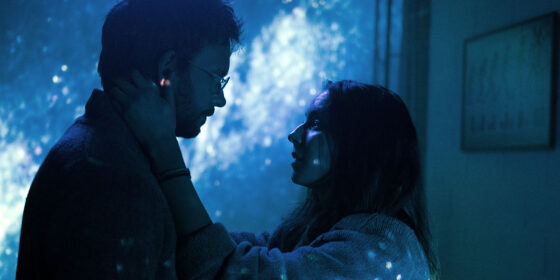 Crumbling under the grief of a lost child and subsequent divorce, astronomer Isaac (Patrick J. Adams) throws himself into searching for extraterrestrial life, with research assistant Clara (the actor’s real-life wife Troian Bellisario) slowly opening him up to new possibilities. Characters question what could be more important than finding alien life, while proclaiming nothing is bigger than space. This somewhat refreshing take on science fiction, focused on optimism and open-mindedness, is unfortunately not extended to the only significant female character in the film, who is never more than a series of stereotypes.

Clara enters Isaac’s life at just the right time: her free-spirited demeanour is exactly what’s needed to reinvigorate the stagnant, sexless professor. Through her, he gets over his ex, is more energized in his work, and finds a general joie de vivre previously absent. Once Clara’s vitality is no longer required, a rare illness is revealed, creating the possibility that this manic pixie dream girl will be fridged. In the meantime, though, at least she inspires Isaac to keep working towards his goal.

Beyond her peripheral role to her lover, Clara’s whole being reads as “feminine stereotype.” Her approach to science is based on feeling, emotions, sensuality. Isaac, all logic and objectivity, can learn from Clara’s sensitivity for his scientific discoveries, but it is only Isaac who thrives. He can assimilate parts of Clara into his research without letting go of his own methods. He can come to feel love again by being with her, becoming a whole man with both social and professional successes (and getting laid). And she gets—well, you’ll see. With a more creative approach to science fiction, Clara would have benefited from a closer look at how women can be people, too.