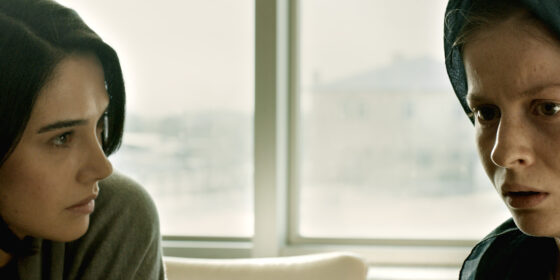 Long before they ever meet onscreen, Chenaz (Funda Eryigit) and Elmas (Ecem Uzun) are in conversation with each other. Chenaz, a resident psychiatrist at a hospital, is a thoroughly modern woman contentedly living with her boyfriend Cem (Mehmet Kurtulus) in their thoroughly modern, minimalist home. By contrast, Elmas is a young bride married off to a much older demanding husband, trapped in a tiny apartment with him and his domineering mother.

In Clair Obscur, director Yesim Ustaoglu initially presents the two women’s lives as the opposite ends of a spectrum of Turkish women’s experiences, one secular and the other rigidly religious, each only glimpsing the lives of others outside their purview. When Chenaz peers into the troubled experiences of her patients, it’s to feel grateful for her harmonious lifestyle. When Elmas looks out her window into the happy homes of her neighbours, she bristles with envy and self-pity.

But this spectrum is more fluid than it initially appears, and Ustaoglu shrewdly begins to tease out her characters’ similarities after a violent event brings the women into each other’s orbit. From there, Clair Obscur turns into a fascinating two-hander as they’re removed from their respective home lives and brought together within the neutral confines of a hospital. There, away from the material evidence of their differences, Chenaz’s empathy for Elmas’ plight crystallizes her growing dissatisfaction with her own personal relationships, and Ustaoglu effectively collapses her initially superficial binary of female .