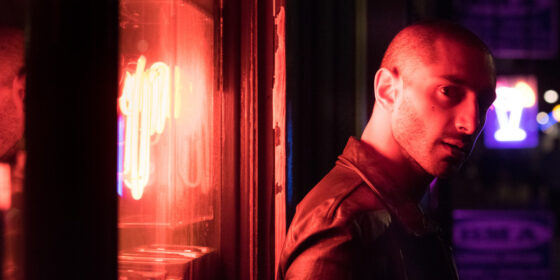 There’s hardboiled and then there’s just a waste of perfectly good eggs; City of Tiny Lights is regrettably the latter. “Death weighs heavier than heartbreak” intones London-based private investigator Tommy Akhtar (Riz Ahmed, fresh from HBO’s The Night Of and soon to be ubiquitous for his role in the upcoming Rogue One: A Star Wars Story), via pseudo-philosophical voiceover about halfway through Pete Travis’ modern take on UK noir, a tossed-off sledgehammer of a line that is about as subtle as the film gets. Akhtar has been hired by a Shady Dame (Cush Jumbo) to find her missing friend. But the case blossoms out into a murky conspiracy involving murder, terrorist plots, shady real-estate deals, and other barely sketched-out story contrivances. Smushed up against this convoluted mystery is a long-lost love from Akhtar’s high school days (Billie Piper) and the horrible secret they share from their youthful past.

The strikingly handsome Ahmed does his best to bring the film to life, but the material affords little room for personality. Travis boils down a novel’s worth of plot (adapted by screenwriter Patrick Neate from his book of the same name) into a two-hour, self-serious experience. Travis’ most annoying directorial tic is a penchant for constant rack-focusing, with a fist fight blurred to the point of inscrutability, either as a clunky visual metaphor for the blurry mystery our hero can’t quite bring into focus, or just because it looks sort of flashy and cool. Think less The Big Sleep and more The Big Snore.