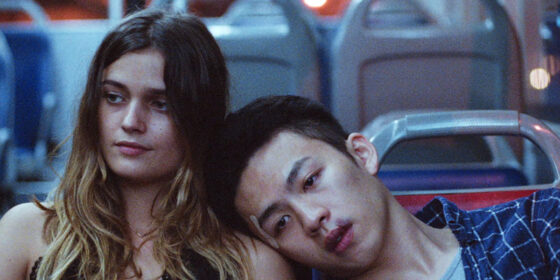 Ho Wi Ding’s fifth feature film is his most ambitious and most interesting. After a couple of beautifully shot conceptual narrative shorts (Respire [2005]; Summer Afternoon [2008]), Ho made several commercial movies (including the sharp cross-cultural comedy Pinoy Sunday [2010]) before Cities of Last Things, which resumes his narrative experiments. The story of the very disturbed and incredibly violent ex-cop Zhang Tong Long (played by the sublimely tough Hou Hsiao-hsien icon Jack Kao) is told in reverse: the first section is set about 30 years in the future; the second in the present (the younger Zhang in this episode is played with feral intensity by Lee Hong-chi, one of Taiwan’s most promising young actors, who also appears in films by Bi Gan and Liu Jie at TIFF 2018); and the third is set in the past, when Zhang is a teenage pre-delinquent. Each section takes place at night; each sets Zhang against or beside a powerful woman whose image is sometimes uncomfortably stereotyped in a way that, not unexpectedly, conforms with the standard misogyny of noir cinema. Nevertheless, the strong performances from Ho’s uniformly fine actresses (Liu Juei-chi, Louise Grinberg, Shih Yin, Huang Lu, and Ding Ling) do much to help complicate and even transcend the generic limitations.

The Chinese title of the film is bitterly ironic here: Xingfu Chengshi literally means “city of happiness,” with its inverse echoes of Hou’s great 1989 masterpiece Beiqing chengshi/City of Sadness. Ho first outlines the bloody consequences and, afterwards, the causes of the collapse of the dominant idealized figure of masculine power and authority—which is, in fact, the inescapable leitmotif of Taiwanese cinema (including Hou’s masterpiece). Ho’s inversion of chronology gives greater emotional weight to the truly extraordinary, surprisingly moving, bravura final chapter in his pitch-black nighttime fantasy of the death and birth of the traditional Chinese father, authority figure, and patriarch.