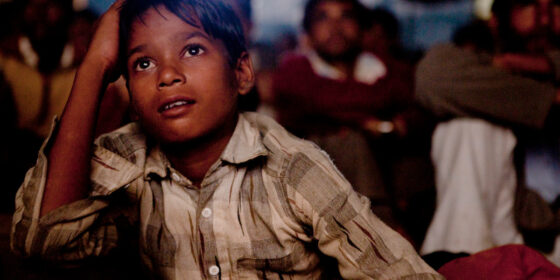 Mohammed, Bapu, and Prakash are three cinema magi: half wizards, not-quite-ghosts, intelligent and hard-working men who have been keeping the art of film (and we mean celluloid) projection alive in the Indian state of Maharashtra. The first two run travelling cinemas, where ancient 35mm projectors show old films inside tents to rural (though dwindling—more on that below) audiences. Prakash’s magic is the engineering kind: he used to repair projectors; now more or less idle, he has invented, at the tail end of film projection’s lifetime, “the perfect projector.”

This elegiac documentary by Shirley Abraham and Amit Madheshiya premiered at Cannes, and it’s easy to see why. Its eloquent, luscious, powerfully designed images aim at, and achieve, a kind of direct and emotional connection with the audience (much as did the Indian popular films that this documentary celebrates). The film is special, though, in its devotion to something closer to a pure, direct-cinema ethic. Though the three gentlemen featured do speak to the camera, there are virtually no captions (save their names), no voiceover, little music, none of the standard documentary apparatus that guarantees a dominating point of view. But the film’s sprawling material—it was shot over several years, and encompasses the transition of Mohammed’s and Bapu’s “Travelling Talkies” operations to digital—is so intelligently organized, selected, and given shape and rhythm, that the documentary itself can claim to be a work of cinema art. It only falls down in its most Cinema Paradiso moments, when a bit of music wells up and we are forced to endure the “wonder of the movies” ideological conceit that obscures more than it reveals. But such moments are thankfully rare, and don’t detract from Abraham and Madheshiya’s achievement here: the affective recreation, on the edge of evanescence but vividly real, of a huit clos, a perfectly functioning cinema world with its own rules, ethics, personalities, and values, at the moment of its passing.