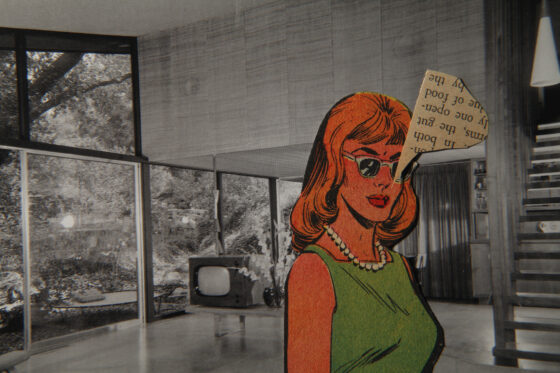 Cinema Scope magazine is proud to present the Toronto premiere of Lewis Klahr’s Sixty Six (2015), in partnership with the Cinema Studies Institute at the University of Toronto, and sponsored by The Beguiling.

In the feature-length collage film Sixty Six, Lewis Klahr pastes together an oblique and ominous narrative from scraps of 1960s printed ephemera (comic books, glossy magazines, advertisements), classical music, and Greek mythology. More than a decade in the making, Klahr’s densely constructed magnum opus is “one of the finest cinematic achievements of the year” (Manohla Dargis, The New York Times),” and is the cover feature of the latest issue of Cinema Scope (the aptly numbered #66).

Named one of the top five experimental filmmakers of the 2000s by Film Comment, Lewis Klahr is a Los Angeles-based artist and Guggenheim Fellow who has been hand-making films since 1977. Specializing in collage, he has exhibited internationally, including at the Whitney Biennial, and his work has been purchased by New York’s Museum of Modern Art, where Sixty Six debuted in December.

“An anthology film in 12 chapters, Lewis Klahr’s animated mosaic Sixty Six is both greater than the sum of its parts and grander than the scope of its one-dimensional decoupage…. Beginning in 2013 as the attempted reimagining of an unreleased 16mm film, the project soon expanded to encompass a multitude of digital miniatures ranging from three to 20-plus minutes in length. Combining outré visual sources––comic books, newsprint ads, pulp literature, and all manner of Pop-Art ephemera––with classical music cues and allusions to Greek mythology, this composite feature is the strangest of hybrids: a personal work of universal provenance.”

“Sixty Six is one of the finest cinematic achievements of the year and a terrific introduction to Mr. Klahr’s work. … [His] engagement with mass culture is as deep and vast as the astonishing archive of material ephemera and personal memories that he reanimates with scissors, a camera and expressive editing. A few of the sections in Sixty Six share imagery and a character from one may show up in another, but each discrete part also has its own integrity, pulse, associations and configurations. The sections work equally well individually; taken together, though, they form a strange and beautiful, quietly powerful and affecting exploration of the pop cultural world that we make and share and that, every so often, can also become our very own fortresses of solitude.”

“Messages and portents bubble up throughout Lewis Klahr’s … Sixty Six, which poetically fuses images and ephemera of the Sixties with Greek mythology. It begins with the brief film ‘Mercury,’ in which light-box-illuminated double-sided pages from Flash comics evoke the fleet-footed messenger god. … Klahr unleashes a dazzling array of visual ideas, deftly combined with sounds, silence, or music and all in the service of what he calls the film’s ‘pop associational mindscape.’”

“[A]n ambitious attempt to view—and review—the iconography and themes of his cinematic fables through the lens of mythic archetypes. … If the gods and superheroes of Klahr’s mythography haunt the embattled dramatis personae of his movies or embody wishes never fulfilled, they are also enduring images that continue to beckon.”

Published quarterly since 1999, Cinema Scope is one of the most respected English-language publications on film worldwide. With unparalleled depth and breadth, Cinema Scope unites experienced critics from across North America with up-and-coming writers. Packed with reviews, essays, festival reports, and interviews, the magazine is geared to cinephiles looking for an intelligent forum on world cinema. For more information visit: https://cinema-scope.com/

About the Cinema Studies Institute:

As one of the longest standing film-study programs in Canada, the Cinema Studies Institute, in the heart of downtown Toronto, has made key contributions to the evolution of this academic discipline through its commitment to scholarship and pedagogy. For more information visit: http://sites.utoronto.ca/cinema/

Founded in 1987, The Beguiling has set a new standard in Canada for comics and graphic novel retail. Showcasing the largest selection of alternative, underground and avant-garde graphic story telling in the country, The Beguiling has a worldwide reputation for excellence. For more information visit: http://www.beguilingbooksandart.com/