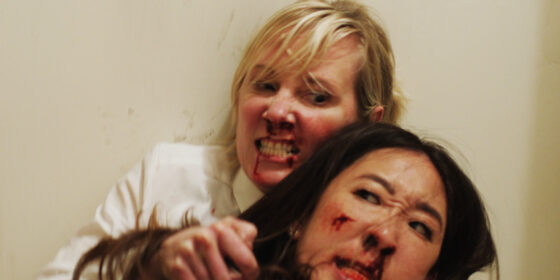 Is it all right that I derive pleasure from watching Sandra Oh and Anne Heche beat the living shit out of each other? I promise I have nothing against either actress. It is simply not often that you get to see normal-looking women both exact and absorb Lone Survivor-levels of corporeal punishment. Oh and Heche go three big rounds over the course of Onur Tukel’s coarsely titled Catfight, a black-and-blue comedy peppered with stabs of satirical speculative fiction and partitioned by blackouts that elide years.

Tippling Veronica (Oh) is the tarnished trophy wife of an affluent businessman. Ashley (Heche) struggles to make rent from her ostensibly politicized paintings and depends on the financial support and patience of her partner Lisa (Alicia Silverstone). The women went to college together and then lost touch; now in their 40s, they reunite when Ashley takes a gig for the caterer furnishing snacks and libations at the party celebrating Veronica’s husband’s latest contract, one that will allow him to profit enormously from some new US-led conflict in the Middle East. They reminisce in the kitchen and then bludgeon in the stairwell until one puts the other in a coma. Fortunes are reversed, loved ones die, US foreign policy turns more diabolical while healthcare gets more miserly, and the only ones to stick by these women through thick and then are a puzzlingly devoted housekeeper and a mentally ill aunt who lives like the Unabomber.

Oh and Heche give valiantly go-for-broken-bones performances. Nothing in Catfight transcends the criterion of a violent funny animal cartoon, and this is perfectly fine. The targets of Tukel’s bloody burlesque are bluntly demarcated, but don’t interfere with the thrust of the film’s tripartite main event, which is exactly as sophisticated and enjoyable as a monster-truck rally.