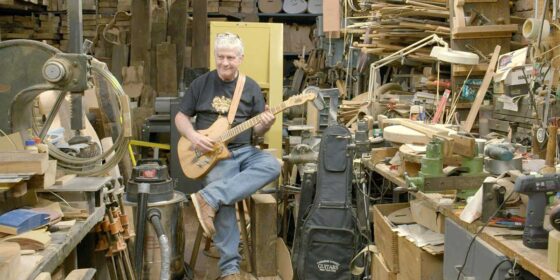 Electric craft becomes a stand-in for analogue’s humanity in Ron Mann’s elegiac Carmine Street Guitars. Rick Kelly is the master guitar maker of the beloved, eponymous Greenwich Village guitar shop. He’s been scavenging wood from historic, mostly demolished 19th-century NYC buildings and turning them into lovingly handcrafted electric musical instruments for decades. Mann’s beautifully burnished, gently-paced film (it has the glow of a handcrafted object itself) observes the always talkative Kelly and his younger apprentice/partner Cindy Hulej (who makes extraordinary wood-burnt portraits on guitars of the Traveling Wilburys, among others) maintaining artisanal traditions of craft and art in a Manhattan that is, just outside the safe preserve of their shop, becoming more post-capitalistically soulless by the day.

Designed as a “week in the life” of the shop, Mann’s film doesn’t hesitate to script (or perhaps partially and loosely recreate) conversations to be illuminated and captured by John M. Tran and Becky Parsons’ sensitive, enfolding lighting and camera. These are graced by cameos of shop devotees and guitar legends including Bill Frisell, Charlie Sexton, and Marc Ribot, and younger musicians like Eleanor Friedberger, Christine Bougie, and Eszter Balint, who drop in to test some of Cindy and Rick’s new instruments. Graciously and generously, the documentary finds time to give us entire performances of improvisations and songs by these walk-in guests; for this alone it deserves garlands of praise, since documentaries about music that actually let the audience hear the whole song, and not just a verse and a bit, are all too rare. Our world is indeed digitalizing, brutalizing, evacuating its own soul, but in certain rare islands of utopian harmony they still make them like they used to, and it’s wonderful to watch. And listen to.