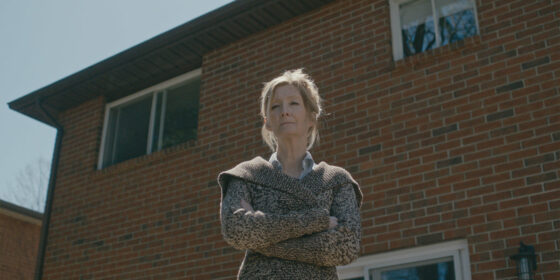 Canadian newcomers Grayson Moore and Aidan Shipley strike gold with veteran Sheila McCarthy in the lead role of Cardinals. McCarthy is masterful as the damningly self-convicted Valerie, a mother of two recalibrating to free civilian life after serving time for apparent alcohol-induced vehicular manslaughter. While her daughters (played by Grace Glowicki and Kate Boland) earnestly show up and show out to aid in her rehabilitation in their respective (and, as we discover, disparate) capacities, Valerie confronts her return with a guarded stoicism, vainly attempting to force normalcy back into her life.

From its opening scenes, Cardinals sets a standard of no-holds-barred storytelling, with shots of Valerie guzzling vodka in her car and the lifeless foot of her victim presenting the brutal facts of the matter as they are. When the son of Valerie’s victim comes knocking, looking for closure, we’re forced to sit with every excruciating moment of the ordeal; we dwell with the characters in a precarious space where instinct drives action, but courage isn’t guaranteed to buoy us against the consequences of those actions.

Cardinals’ brisk pacing doesn’t waste a moment, and Moore and Shipley also manage a series of tonal shifts, from horror to incredulity, with moments of dark humour as well. Though Noah Reid’s performance as the victim’s son initially feels stilted and off-putting next to McCarthy and Glowicki’s comparatively free-flowing sincerity (Boland shines too, though her state of petrification often renders her relatively voiceless, both figuratively and literally), the action  increasingly comes to provide context for his demeanour, straight through to the staggering climax.