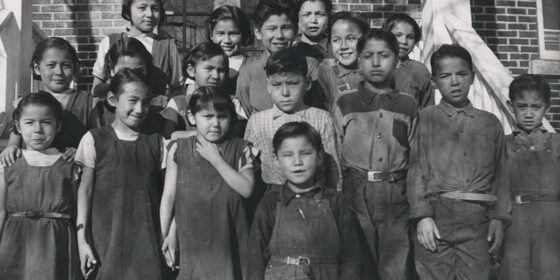 There is a moment near the end of Alanis Obomsawin’s purposefully epic-length courtroom-procedural documentary We Can’t Make the Same Mistake Twice where the camera catches a lawyer’s convictions wilting—he can’t even really make eye contact with the tribunal he’s trying to convince, much less sell them on the idea that the Canadian government isn’t answerable for past, present, and (at this rate) future transgressions against the dignity and destinies of First Nations children. This is not rabble-rousing filmmaking: it’s a sober record of a case that started with a single very specific, policy-oriented complaint filed by a single civil rights activist and, in the way that reality tends to do, radiated outwards (and backwards) through history in ways that can’t be contained by the Parliament Hill setting. The subject here is not simply the cruelty and callousness that underwrites so many North American myths—i.e., the ones written by the winners, which tend to crowd out the ones that sustained their victims—but how Canada’s scrupulously democratic political processes can be commandeered to prevent progress under the guise of protocol. Obomsawin shows that people don’t have to be villains to think, do, and advocate for hurtful and inhumane ideas; she suggests that heroism can be embodied equally by active practice or simple endurance; she assumes (hopefully not wrongly) that a no-frills presentation is the best format to let the facts open up an emotional context (rather than the other way around). She’s never been a flashy or self-consciously dexterous director, and yet she’s managed—here and elsewhere—one of the greatest tricks a documentarian can pull: she is physically and verbally self-effacing even as she evinces her thoughts, her feelings, her anger and her agenda (of course she has one, who doesn’t?) with as much strength as she can muster.