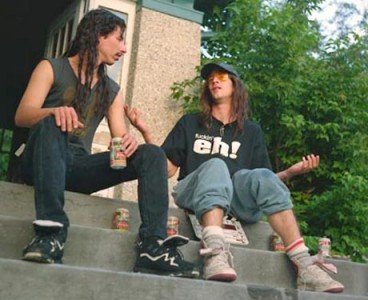 On December 8, Canadian filmmaker Reginald Harkema sent out an e-mail, received by colleagues, industry types, journalists, and others whose addresses he had accrued for one reason or another. Bearing the subject heading “Canada’s Top Ten,” Harkema’s e-mail contained the following brief message:

But this is ridiculous.

Below Harkema’s missive—the “Charles Manson romantic comedy” line was a nod to Leslie, My Name Is Evil, Harkema’s lively pop-art biopic that was snubbed the previous year—was the information that Michael Dowse’s Fubar II, which Harkema edited, had been left out of the Toronto International Film Festival’s Canada’s Top Ten list, its annual roll call of the best in Canadian features and shorts. Published alphabetically, the Top Ten list is really two lists: two juries, comprised of filmmakers (Deborah Chow, Bruce Sweeney), journalists (Linda Barnard, Teri Hart), programmers (Kim Yutani, Agata Smoluch Del Sorbo) and various industry stalwarts select the ten best features and shorts of the year. In order to be considered, the films must have obtained a major theatrical release, or played at a “major” film festival in 2010; this year, the lists were winnowed down from more than 100 submitted films. While Fubar II wasn’t lacking for recognition from TIFF—after missing the boat on the 2002 original (only to see it become the Canadian cult film of the decade), the festival seemed to acknowledge its slip-up by according II the esteemed opening slot of Midnight Madness—its exclusion from the CTT list is telling, not only in light of the film’s surprising verve and freshness but for the possible new directions it suggests for Canadian cinema. 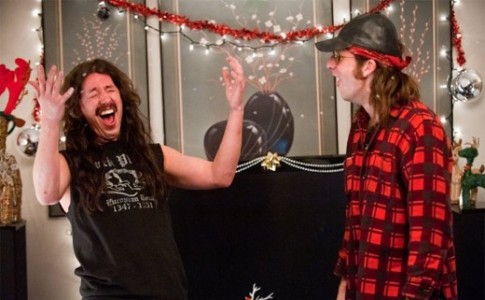 The cult success of Fubar seems like a non-duplicable event, and a sequel could have easily been just a rushed-out encore for the legions of fans eager to see more from Terry (David Lawrence) and Dean (Paul Spence). With an inflated budget and a more detailed script—something like 30 whole pages, still leaving plenty of space for the improvised comic interplay of its principals—Fubar II builds cleverly and successfully on the original; in Dowse’s hands, even the film’s third-act left turn into a bona fide Christmas movie comes off smoothly. While it’s hard to gauge the real success of a film like this until it’s had time to build up a cadre of loyalists subjecting themselves to ritualized repeat viewings—and now that the film is out on DVD and Blu-ray, this process is only just getting started—the various achievements of Fubar II point up some potentially viable options for our national cinema currently going unexplored.

While Canada has never been shy about churning out direct-to-video sequels to broad-appeal trash like Porky’s (1982) or the Ginger Snaps films, the potential for franchise filmmaking has always remained a bit inconceivable. This isn’t to propose that Canada merely parrot American strategies of tentpoles, franchises, and adaptations of nostalgic kiddie cartoons (though ReBoot and The Edison Twins are ripe for big-screen “reimagining”), but a national cinema that seems to exist by-and-large on the festival circuit should be courting a plenitude of options and alternatives. And with Bruce McDonald fleshing out the alt-Canada universe of Hard Core Logo (1996) with Trigger (which made the CTT cut this year) and the forthcoming Hard Core Logo II (which recently premiered at Whistler), it seems as if serializing and franchising past successes could be a viable option, for reasons of prestige as much as commerce. (It worked for Denys Arcand, after all.) 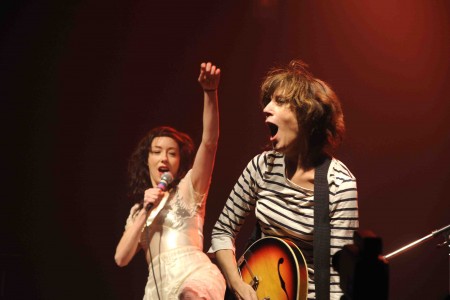 As TIFF’s purchase over what Harkema described in a later e-mail as the “narrative” of Canadian cinema continues to expand along with its sleek, acronymic brand identity, exercises like the Top Ten have become suggestive of the larger machinations that serve to certify films as worthy in a nation where factors like box-office grosses prove not just inadequate markers of quality, but instrumentally useless. Though the feature jury neglected Fubar II and Daniel Cockburn’s exceptional feature debut You Are Here (shunning the latter’s self-consciously cerebral head-tripping as they did the former’s wildly abandoned head-banging), this year’s Canada’s Top Ten isn’t all that bad. There was some deserved love for Ingrid Veninger (MODRA), Denis Côté (Curling) and Lixin Fan (Last Train Home); Vincenzo Natali’s Splice, an interesting big-budget attempt to build on the Cronenberg legacy, also received a well-deserved nod. (The vaunted Xavier Dolan also showed up on the list with Les amours imaginaires, as speculators might have projected.) The quibble, though, is not so much with the unevenness of the films selected, but rather the whiffs of ulterior motives that they seem to betray. Many of these films had screened at festivals (including TIFF), netted awards and critical recognition, and had a bit of momentum heading into Top Ten voting, but there’s no film on the list that better evinces the existence of Harkema’s “narrative” than Richard J. Lewis’ Barney’s Version, now rolling out into wider release.

Based on a novel by a Canadian literary institution, boasting a bit of star power (courtesy lead Paul Giamatti and Dustin Hoffman), a Venice competition slot and a relentless push by producer Robert Lantos, Barney’s is the closest that Canada comes to something like a banner film. Not only does its star cachet means that it has the potential to spill over into the US market (it’s being distributed in the States by Sony Pictures Classics), but it is clearly being positioned by its enterprising producer as both a prestige picture and a fete for the industry on par with Ted Kotcheff’s earlier, decidedly more seminal Richler adaptation The Apprenticeship of Duddy Kravitz (1974). The run-up to Barney’s saw a cover story on Mordecai Richler in The Walrus (penned by Richler’s son Noah), stacks of reprints of the source novel cluttering up the vestibules of Chapters stores across the country, and special, Lantos-hosted screenings held across North America; what’s more, in anticipation of the film’s limited release the Canadian Press newswire saw fit to release an article sussing out critical reactions across the country. 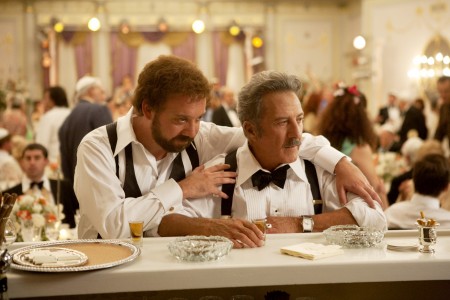 In light of all this it is perhaps no surprise that Barney’s Version is, all things considered, entirely middling. The film might have been entertaining if it went out over two nights on CBC, which would serve to both break up its bloated two-hour plus runtime and more fittingly suit its purely televisual aesthetics—to be expected, perhaps, as apart from Whale Music (1994), widely regarded as the worst film to ever open the Festival of Festivals (at least until this year’s Score: A Hockey Musical), director Lewis has worked primarily on the small screen. Moreover, the film’s glad-handed valorization of Giamatti’s Barney Panofsky—a well-heeled, narcissistic asshole of the Updike variety whose cigar-chomping callousness we’re supposed to regard as charming and curmudgeonly—seems at times outmoded and at others wholly sinister.

The second most egregious offender on the CTT list is Denis Villeneuve’s Incendies, dubious winner of numerous “Best Canadian Feature” prizes (at TIFF, VIFF, Calgary, etc.) and selected as Canada’s Best Foreign Film entrant for the Oscars. More than anything, the hubbub over Incendies seems like the culmination of critical successes enjoyed by Villeneuve which never really came to a head, despite the Genies and FIPRESCI awards for Maelström (2000) and Polytechnique (2009)—all minor trophies compared to that polished Oscar waiting in the wings. Villeneuve has always had an eye towards commercial success: he filmed Polytechnique in both French and English in hopes that it would slip more seamlessly into the English-Canadian and American markets. With Incendies, however, he’s made his most marketable and, not coincidentally, most overrated film, its Québecois-Arabic globetrotting giving it that whiff of the foreign-prestige item that makes films like this saleable to English-speaking audiences. 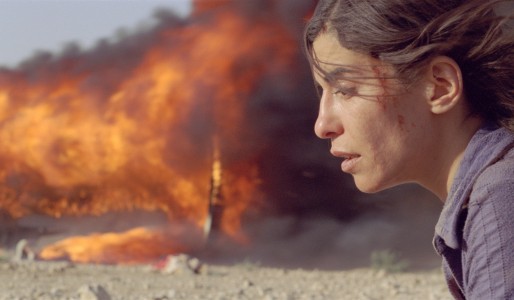 Adapted from the award-winning play by Wajdi Mouawad and hinging on Iñárritu-worthy plot contrivances, a single believable performance (Lubna Azabal), an appearance by Rémy Girard and the instant cred of a Radiohead soundtrack, Incendies is precisely the kind of film that snares Canadian cinema into a weird double-bind. On the one hand, it’s bound to attract attention in foreign markets, which further broadens the international repute of Canadian (or at least Québecois) cinema—at least that of a certain, familiar stripe. On the other hand weighs the more nagging issue of it not being all that good—not least in the ham-handed and self-serious way it handles its calculated Big Reveal. (Spoiler alert: at least when Oldboy [2003] or Dogtooth [2009] broached that certain taboo, they went about it satirically or with a hyperbolically overwrought sense of melodrama; Incendies plays its wonky web of family fucking for pure, sentimentalized schmaltz.)

But it’s this kind of unblinking, bogusly high-minded seriousness that TIFF’s juries love, because it smacks of craft, prestige, and accomplishment due to its resemblance to other foreign-language entertainments of comparable mediocrity (again, Iñárritu). It may not be particularly clever, but it’s respectable. And decorum and propriety are at a premium when TIFF unspools these flicks at the Lightbox later this month—where Incendies will soon after open in an exclusive run—and then marches them across Canada. The problem emerges when “TIFF’s Top Ten” becomes “Canada’s Top Ten,” giving the festival the last (and often the first) word on the shaping of our national cinema. Even if these films have redeeming qualities, it’s the manner in which they’re built from the ground up to court awards and respectability that rankles—and the predictably reciprocal collusion of award-granting bodies seems to preclude the high-kicking pratfalls and foul-mouthed hoser patois of a Fubar II.