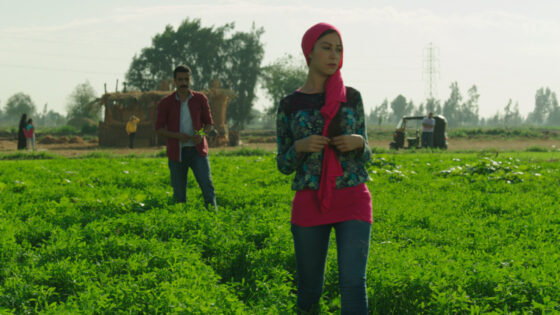 In the small Egyptian town of Belqas, two brothers work for their father’s catering service:  Reefatis a lovable oaf; Galal lives with the disgrace of being a draft dodger. Polar opposites, they’re nevertheless both defined by their romantic entanglements: Reefat has his eyes on Shadia, a rich divorcee who can’t bring herself to admit her reciprocal feelings due to age and class differences. Galal, on the other hand, has it for Reefat’s fiancée Karima (Meena Shalaby), all while being pressured by a childhood friend to move to Saudi Arabia to start a new life for himself and his young son. The wedding they cater, which takes up the majority of the film’s runtime, also plays host to the wealthy Farid, who is trying to get Reefat and Galal’s father to sell his business, possibly for nefarious reasons.

While the film’s ever-expanding melodramatic narrative led some critics out of Locarno to label it a “soap opera,” Nasrallah’s direction—situating every character moving through rigorously production-designed living spaces by master shot or else carefully deploying close-ups for a number of silent film-like lovelorn glances—couldn’t be farther from daytime television (although by making a movie about catering, he has perhaps made the Egyptian version of Party Down). Brooks, Meadows and Lovely Faces is elevated by a willingness to take risks with tone and form, be it a late-in-the-game castration or a climax featuring a blatantly fake-looking swarm of computer-generated bees. Shunning the need to reconfigure the melodrama into a more festival-friendly, staid, or academic experience, Nasrallah’s rollicking comedy is a timely reminder of what “popular cinema” used to mean, and still does for an internationally under-represented industry.