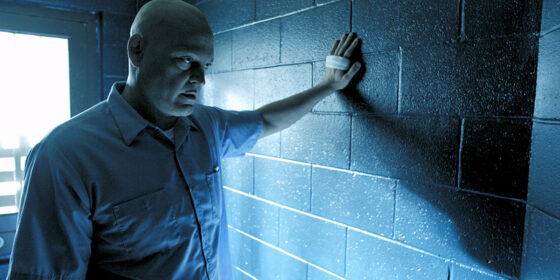 Was Vince Vaughn the Owen Wilson to Jon Favreau’s Wes Anderson? As woebegone drug runner Bradley Thomas, Vaughn delivers a rock-solid command lead in S. Craig Zahler’s Brawl in Cell Block 99 that carries the raggedy mantle of Nolte, Kristofferson, Bronson, McQueen, etc. It’s a film that makes it easy to remember why Vaughn was a major talent, the emotional conscience of The Lost World: Jurassic Park and heir apparent to guys like Chevy Chase or Bill Murray in Wedding Crashers. Brawl is a neo-Western that descends, valiantly, into a supermax black-site prison, climaxing in a gladiatorial fiesta of cranked-to-11 skull-stomping.
Expecting a baby with his wife (Jennifer Carpenter), Bradley says yes to a meth-smuggling job that goes horribly wrong; he kills one of his partners, turns himself over to the police, and is sent to a medium-security prison for seven years. On the second day of his incarceration, Bradley finds out—via Udo Kier, untucking the unctuousness—that his wife has been kidnapped by his pissed-off drug-lord client. An abortionist is standing by, and Bradley is tendered an ultimatum: either he finds and murders a convict in Cell Block 99 at a top-level maximum-security prison, or his daughter’s unborn limbs will be sent to him there. Bradley scales the system, fighting everybody around him and swiftly working his way up the ladder to 99…but it turns out the client is waiting for him there.

Zahler’s script is perhaps too lucid for its own good, painstakingly detailed in its survey of the two prisons. Nothing is withheld from the viewer along Bradley’s quest, and each rung feels like a new chapter, à la The Little Red Hen; by 2017 standards, suspense is almost a negligent priority. There is of course a huge market and precedent for this kind of thing. One mutant consequence of our wintry sales-and-distribution climate is the forever-widening mud vein of lower-middle-budget pulp with sellable corporeal punishment scenes, usually available on VOD. Some, in a mad rush to turn their backs on the Walter Hills and John Carpenters of yesteryear, may even rate Brawl on par with Nimrod Antal’s Armored or the (less sedentary) thrillers of Jaume Collet-Serra. Whereas the jagged cutting and nu-metal soundtrack of Hill’s (Re)Assignment at last year’s TIFF suggested a seasoned veteran striving to keep his technique market-competitive, it makes sense that the younger filmmaker, treading similar pulp terrain as Tarantino without the schizo-postmodernism, comes off overeager in his classicism. Anyone who has ever glimpsed, say, Sylvester Stallone’s Get Carter in an airport bar and hung their head at a bygone era when steak-and-potatoes macho-man actioners took 40 minutes longer to get to the meat will find their fill here. But Brawl in Cell Block 99 lacks the humane despair of Jules Dassin’s Brute Force or Jamaa Fanaka’s Penitentiary, and if I’m implicating too many proper nouns here, blame Zahler: for all the success of this execution, Brawl can’t help but resemble too many older and better movies.