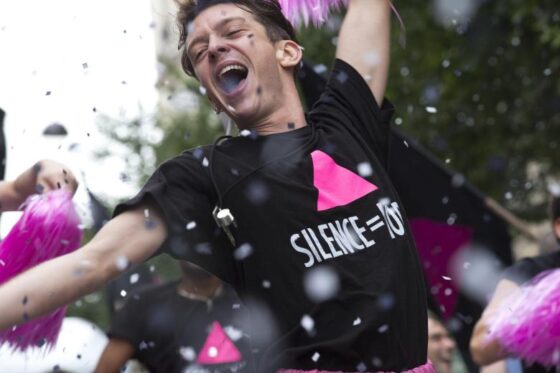 A sprawling yet affectingly personal portrait of a group of Parisian activists and ACT UP members in the early ’90s, Robin Campillo’s follow-up to the ambitious social thriller Eastern Boys (2013) is defined by a nuanced understanding of group dynamics and the delicate nature of sociopolitical resistance––traits no doubt informed by the Moroccan-born French filmmaker’s firsthand experience as part of the storied AIDS organization during the same period. A frequent writing partner of director Laurent Cantet, Campillo employs an intelligent sense of linguistic interplay in his work; the pair’s most well-known collaboration, The Class (2008), attempted to turn academic debate into a kind of cinematic music, to the delight of many critics.

BPM (which took home the Grand Jury Prize at Cannes) doubles down on the writer-director’s vernacular interests, presenting the ACT UP meetings as raucous and passionate displays of anger, compassion, and fraught solidarity. An ensemble piece in the truest sense, the film allows ample time to acquaint oneself with the group’s many members. There’s de facto leaders Thibault (Antoine Reinartz) and Sophie (Adèle Haenel), who preach peaceful protest even as their compatriots rebelliously plot more demonstrative statements; Nathan (Arnaud Valois), a fresh-faced, HIV-negative recruit who experiences some pushback from some of the group’s more radical veterans; and Sean (a revelatory Nahuel Pérez Biscayart), a disaffected and fatally afflicted young man whose destiny the film follows most closely.

Cinematographer Jeanne Lapoirie’s camera captures the verbal sparring in extended shots that take in the full emotion and energy of the meetings, while Campillo exhibits an admirable determination to document the full spectrum of the group members’ personalities and lifestyles. Quiet, intimately composed love scenes soon run up against blaring club sequences that see the characters letting themselves go in moments of nocturnal abandon. But these interludes punctuate the drama more than define it, and as BPM pushes towards the close of its 140 minutes, it begins to sacrifice a bit of the momentum that Campillo so expertly harnessed in Eastern Boys. To further belabour the music metaphor, you might say this is more of a low-slung house track than a chiselled techno cut, which is to say it’s more likely to pull the heart’s strings than make it race.