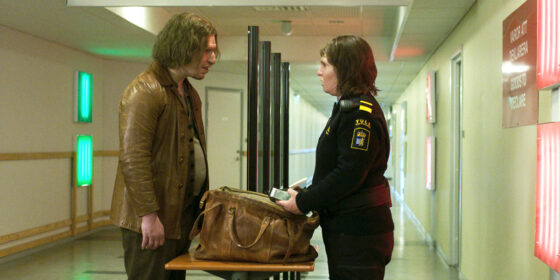 Based on a short story from Let the Right One In author John Ajvide Lindqvist, this naturalistically fantastique sophomore feature from writer-director Ali Abbasi similarly depicts the romantic union of two outcasts whose mythological origins are teasingly parcelled out. Vaguely lupine-looking at first glance, and blessed with a heightened sense of smell, Swedish customs officer Tina (Eva Melander, inventively expressive under layers of makeup) is introduced on the job being sniped at as an “ugly bitch” by a young male tourist for her abnormal appearance, to which she reacts nonchalantly; going home to a codependent relationship with her abusive boyfriend offers less dignity. The “right one” in this scenario comes in the form of the physically similar Vore (Eero Milonoff), who she develops a curiosity about after searching and investigating him at her checkpoint.

Reviews from Cannes were reticent to give away the specific Nordic folklore that Border draws upon, which points to how overly reliant the film is on surprise and novelty; once the cards are laid on the table, there’s a clunky, first-draft quality to the way Abbasi’s dialogue recaps its mythology for the unfamiliar viewer. What really sinks the film, though, is a subplot involving Tina’s involvement in busting a pedophile ring, an invocation of all-too-human evil that’s supposed to render her and Vore more identifiable by contrast, for all their “inhuman” characteristics. Instead, it betrays a lack of faith in the familiarity of the Other, something that might have given lasting resonance to what is otherwise an initially intriguing but finally self-consciously distinctive curio.