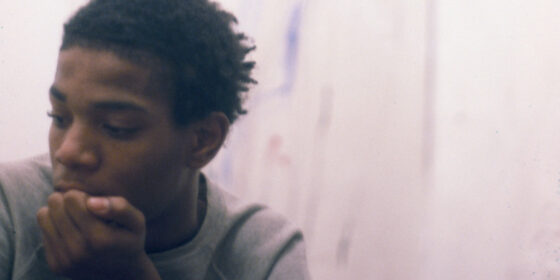 GELDZAHLER: So they’re kinds [sic] of indexes to encyclopedias that don’t exist?

Given that this exchange between curator and artist is typical of the latter’s saintly tendency towards terseness, Sara Driver’s decision to render her portrait of the five years before Basquiat exploded onto the art scene with the words of his peers, rather than his own, becomes easier to understand. His work, of course, teemed with language from the beginning: the graffiti he made as SAMO consisted of almost nothing but, and this often inscrutable text remained a crucial part of his practice until the end. But he never had his fairy godfather Andy’s way with a bon mot, and so Driver sets him loose through her featherweight film as a hip, silent ghost. He slides through the streets and spots and squats of Manhattan in a range of archival footage; here tagging a wall, there grinning behind Glenn O’Brien on TV Party. As an index of cool in New York circa 1980 stops by to chat, BOOM FOR REAL’s picture of Basquiat sits in the negative space of what’s finally another downtown hagiography (at a festival where one of the best films tells again of Saint Joan, it’s worth considering just how much artistic mileage can be derived from saints). Driver knows cool, and, to borrow from one of New York’s current crop of aspirant hipsters, she was there, so the results are thorough, a fine primer for anyone who, like the film’s Basquiat, is refining their nose for culture.

And yet, what we find out about him does little to illuminate the work or the man, and what we find out about New York seems a waste of Driver’s extraordinary eye for the city’s funkiest textures and sharpest angles. (The film opens with a shot from her husband’s Permanent Vacation, an image of lower Manhattan drained of colour and haunted by the Twin Towers, which condenses the sadness of the fact that it’s been nearly a quarter century since Driver’s last feature). As this parade of scene representatives—a collection of largely white artists, curators, critics, and former party kids—rolls on, I found it hard not to imagine people I might have preferred hearing from instead. Admitting that it’s a fool’s errand to wish a film other than that which its maker made, I wondered what Marcus Jahmal, one of the most exciting painters to debut in New York in recent years, might have had to say about the arc from street art to the downtown gallery scene. Or what insights Martine Syms, whose conceptual work on black capitalism echoes Basquiat’s nervy movements through branded iterations of himself, might have brought to his transitions through mediums and personas. Or what any of the numerous artists currently working in the wake of Basquiat’s unique conception of neo-expressionism might  be turned on by in the work itself—the handling of paint, the free play of materials, the forcefulness of his line, the urgent mood of his colour. And most of all, I wondered what any young artist working today might think about the fact that, in dying younger than Jesus, Basquiat—now the most expensive American artist to ever live, following this year’s $110-million auction sale of a painting that originally went for $5,000—became an eternally “emerging artist,” the ideal figure of the art market that was blossoming in the year’s covered by Driver’s film, a massive, global shell game which looks, in a lot of ways, like New York City today.