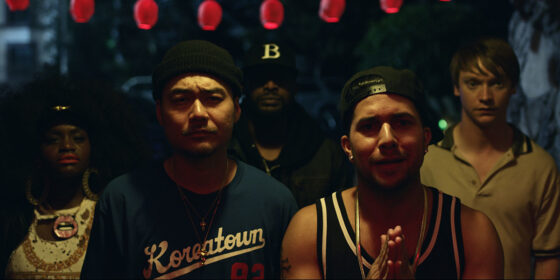 Or: Do the Wrong Thing. The protagonist of Joseph “Look What You Made Me Do” Kahn’s Eminem-produced 8 Mile satire (scripted by Toronto-area rapper Kid Twist) is a slim, shady grad student writing a dissertation on the subaltern subversiveness of clandestine rap battles. After some encouragement from a legendary (black) rapper—who tells him it’s better to use a certain word with impunity rather than tiptoe around it—Adam (Calum Worthy) proves quite the (white) wordslinger, dishing out jaw-droppingly politically incorrect taunts tempered (at least in theory) by the tangled intellectual jerry-rigging he’s learned at the top of his class in Berkeley.

To say that outrageousness ensues is to undersell the potency of Bodied, which—and this is not necessarily, but in this case very much, a compliment—captures, more than any other movie I’ve seen so far in this horrible fucking year, the tone of free-floating, ephemeral anxiety and socially-performative unease that has so far defined 2017, and seems to be lying in wait for the foreseeable future. It’s impossible to say for sure if Kahn—whose music videos, feature-film output and Twitter feed comprise a portrait of an obsessively pop-savvy artist who isn’t afraid to look really stupid (i.e., that Taylor Swift clip) even while he gives off signals that he’s smarter than the mass audience he’s chasing—has made a coherent statement; I am not sure, actually, that he has. But, working in the same glib, giddy, glossy mode as Detention, he’s erected a lightning rod, and the results are electric. The film’s manic, multifaceted attack on both P.C. identity politics and cultural appropriation—and also on those forces that would seek to deny the validity of the former and self-servingly sneak the latter through the back door—touches (and also gets on) nerves all over the place, especially in the way it keeps annotating its transgressions with the same shit-eating, we’re-all-just-playing ass-covering that comes to define Adam’s unpleasantly meteoric rise through the ranks of a fraternity that confers its own kind of “brother” hood. (Hey, rep programmers: double-bill this with Get Out at the end of the year.)

It’s almost beside the point to say that Kahn’s direction and staging are wonderfully fluid (like Edgar Wright, if he gave a shit about anything beyond his own iPod), or that the actors are all great, or that the raps are dazzling and appalling, but all the provocation in the world is worthless if it isn’t put across with some skill. In this case, it is; and so here we have a movie that is going to piss off a lot of people, maybe rightly, maybe even more than it can ultimately justify—provided somebody buys and distributes it, of course.