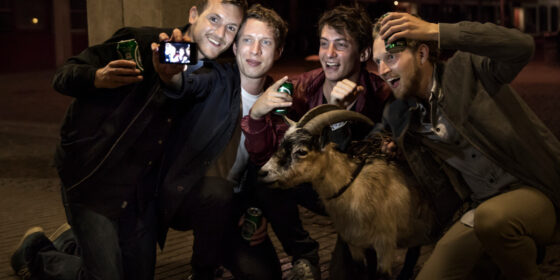 “The highbrow part of me likes to call the film a requiem for youth,” writes Rasmus Heisterberg in his director’s note for In the Blood, a film which comes off as more of a kiss-off to the arrested development of young men. The Danish screenwriter’s directorial debut focuses on the friendship between Simon (Kristoffer Bech, frontman of the punk band Shiny Darkly) and Knud (Elliott Crosset Hove), two twentysomething medical school students. They spend all day working in a teaching hospital and all night partying with their roommates in a massive shared flat. When Knud and the others want to sell the pad and settle down with their respective girlfriends, Simon lashes out—so unprepared is he to face the suburban reality of marriage, mating, and mortgages that he plunges headlong into a self-destructive binge of drugs, dancing, and casual sex, the latter with a cute bartender named Emilie (Victoria Carmen Sonne).

So yes, it’s yet another coming-of-age debut film built from the same old pre-fabricated template as countless others before it, in which the natural rite of passage into adulthood requires its (usually male) main character to regress into the worst behaviours of waning youth. The only interesting wrinkle this time around are the medical school sequences: though Simon is selfish and belligerent in his personal life, he clearly has a natural-born talent for medicine, and his savant-like diagnoses are like a Danish analogue to House. But if the contrast between bad man-child/good doctor is supposed to be complex and compelling, it’s all over too quickly to leave any lasting impression. T’is but a flesh wound.