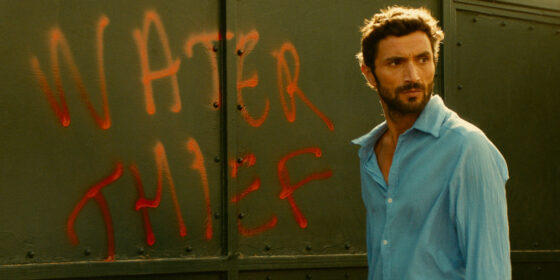 In a festival with almost as many world premieres as Canadian Tim Hortons franchises, Joyce A. Nashawati’s debut feature Blind Sun is an anomaly in that it premiered all the way back in Thessaloniki last November (and played numerous semi-illustrious international and fantasy festivals since). So, then, is this a special case, a film so good it merits such an exception? Or are there more nefarious goings-on here? This vexing conundrum is mirrored in the film’s own plot, which sees Ashraf (Ziad Bakri), an Arab immigrant to Greece, house- and cat-sitting at a French family’s luxurious villa in the middle of a heat wave and concomitant water shortage. Stewing in his own sweaty loneliness, with nothing to do but make sure the cat has his water, Assaf soon enough starts to experience hallucinations (generally the first refuge of a scoundrel filmmaker). A visit to an archaeological dig in the hot, hot sun is followed by a possible intruder/stalker or (because why not shake it up a little) the hint of an evil spirit. From the opening scene of Ashraf being stopped by a policeman and having his residence papers confiscated, the film hints at an undertone of social critique. It takes place in a dystopian neo-neoliberal future where water is scarce and is owned by an international conglomerate called Bluegold, but it keeps such details mainly in the background in order to focus on Ashraf’s loneliness and strangeness, shot awash in yellow. One of those waking nightmares, ultimately Blind Sun is a watchable and somewhat absorbing (and familiar) stylistic exercise. When it comes down to it, the film is likely better than most of those world premieres, but the tantalizing mystery of its inclusion persists.