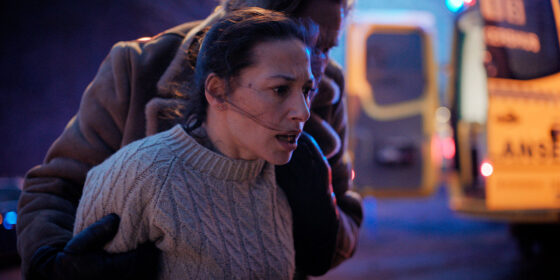 Swedish actor Tuva Novotny (known to English-speaking audiences from recent turns in Borg/McEnroe and Annihilation) makes her debut behind the camera with Blind Spot, about a young couple who are thrown into crisis mode over the course of a single night when their eldest daughter seems to have attempted suicide by jumping from her bedroom window. Much fawning will be done over the film’s exclusive use of protracted long takes, each upwards of ten minutes in length. It certainly is an impressive feat, both from a technical and performance standpoint, but it’s a gimmick that can also be something of a crutch: flashy filmmaking used to prop up weak material. Which, unfortunately, is the case with Blind Spot. Billed as an indictment of social services and mental-health institutions, the film’s depiction of grief is dully one-note. Novotny’s actorly origins reveal themselves in the way she uses single, unbroken takes to showcase the cast’s histrionics of anguish: sobbing, wailing, streaming tears, and snot. It’s a harrowing watch, but not for the reasons Novotny intends.