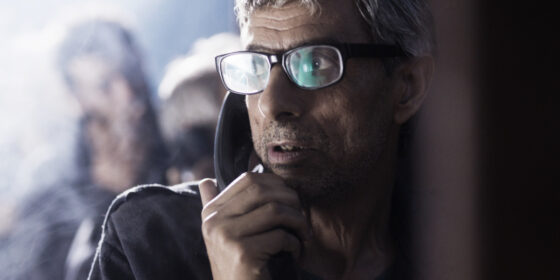 The inmates are running the asylum in Blessed Benefit, a dissection of Jordan’s masculinist pecking order that—if documentarian-cum-satirist Mahmoud al Massad is to be believed—runs entirely on graft/dumb luck/both. An easygoing contractor named Ahmad (Ahmad Thaher) finds himself jailed over an uncompleted job, to the tune of 1800 dinars (roughly $2500 American), learning to navigate the system as besmirched outsider while fresh meat in the eyes of his fellow convicts. Ahmad’s genteel nature exposes a network of judicial payouts and state-reified corruption; his dorm-like surroundings slowly assume the qualities of a men’s therapy group, making the film an anti-miserablist social-issue drama that’s nonetheless frequently hilarious. Swap World War II for neoliberal capitalism, and a kind of post-Arab Spring Stalag 17 (1953) ensues: Ahmad’s attempts to get himself freed by a bumbling cousin repeatedly fail to pass muster, while a long con involving 10 Canadian laptops brings everything full circle in a bitter local rejoinder of the globalized happenstance made trendy, briefly, by neoliberal fantasies like Babel (2006) and 360 (2011). Anchoring the film to his Candide-like protagonist, al Massad keeps the narrative trajectory off-kilter, allowing Blessed Benefit to be diagnostic while avoiding prescriptivism. When Ahmad arrives for sentencing, he aligns himself with a gaggle of better-dressed “stock-market guys” separated from the group, presumably for better treatment. The scheme lasts but a few seconds before he’s corralled back into the bigger group of detainees, but who can blame him—or indeed, in this economy, anyone else—for trying?