Bleed for This (Ben Younger, US) — Special Presentations 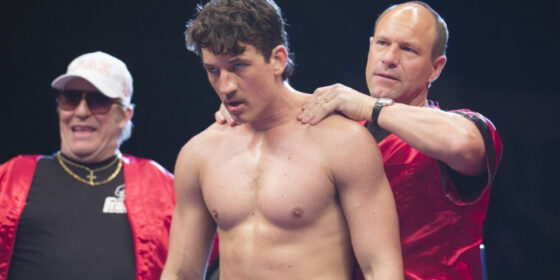 Fun fact about the tenacious American boxer Vinny Paz, or as he was known during his heyday, Vinny Pazienza: In his final bid for the WBC world super middleweight title, he lost to Canada, represented by Quebec’s Eric “Lucky” Lucas. No Canadian has made a movie about Lucas, not yet anyway, but the Americans—led by writer-director Ben Younger and executive producer Martin Scorsese—have made one about Paz. Presumably because he wasn’t enough of an asshole in real life to rate as a viable lead character for one of Scorsese’s own movies as director, Paz became a subject for Younger, who has been away from features for a whopping 11 years. The result, titled Bleed for This, is the very definition of routine.

First, the movie’s strength. It resists telling Paz’s life story, what might be called “The Vinny Paz Story: From Rhode Island to The World.” This would’ve been duller than the flat lining entertainment in front of us, for the basic reason that Paz generally and handily won the large share of his bouts. Instead, Younger’s script wisely concentrates on his key period of personal drama that involved two physical struggles. Paz (played by Miles Teller without the energy he brought to his role as a much-abused jazz student in Whiplash) finds it too difficult to maintain his 140-pound number at the light welterweight class, he makes the unusual move of going up to light middleweight. (He eventually moved up to super middleweight.) Then, he barely avoids a severed spine and permanent paralysis in a head-on car crash shortly after taking the WBA light middleweight belt from Gilbert Dele in a bout in his hometown of Providence, R.I.

Paz’s determination to get back into fighting shape, against doctor’s order to hang up his gloves, could have been an opportunity to capture insane obsession on screen. But the staging and storytelling are standardized, an act of going through the motions rather than burrowing inside the mind of an athlete who would rather risk life-ending injury than quit. By any rational gauge, Vinny Paz was crazy to do what he did, and what nails his story as a seemingly surefire movie is that he recovered, trained and defeated Luis Santana by unanimous decision in his first fight back in the ring. (The script condenses this period, and depicts his unprecedented comeback as against Roberto Duran, who was actually the sixth fighter that Paz faced and won since his accident.) Bleed for This flinches from plunging into the madness, the place where a truly interesting movie resides. Instead, it flounders in the lightweight division.