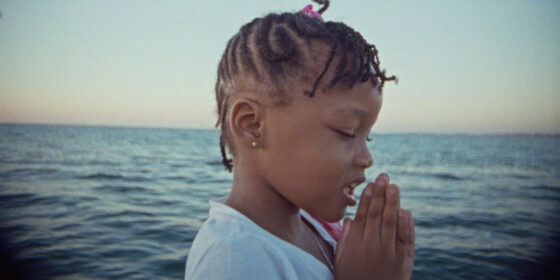 Khalik Allah has staged two homecomings in as many documentary features. In Field Niggas (2015), the New York-based photographer and filmmaker took his camera to the streets of Harlem, capturing slow-motion footage of nighttime life at 125th and Lexington. The scene was familiar to Allah, who frequented the area in his adolescence as a student of the Five Percent Nation, founded and headquartered mere blocks away in the same north Manhattan neighbourhood; the director has said he experienced the work of making his debut feature as coming “full circle,” the bridging of his past and burgeoning selves.

Allah’s next project would take him further from his base, but closer to his blood-familial heritage. In Black Mother, the filmmaker embarks on a sprawling odyssey through churches, schoolhouses, living rooms, hotels, and alleyways in Jamaica, the country of his maternal ancestry. Over 77 minutes, piercing moving portraits of subjects both young and old, familiar and strange, scroll past his lens overlaid with snippets of rolling Patois dialogue and a cappella folk songs parsing cultural histories, personal philosophies, and contemporary social conditions. Amidst street-market bustle and rural repose alike, the artist records signs from all walks of life, maintaining the same sincere, dignified hyper-focus on his human subjects that characterizes his portrait-based still- and moving-image work. Sonically, the filmmaker’s signature, half-diegetic vocal soundscapes are blended with the rhythms of dub to create a transfixing, locale-specific tribute.

As with his previous film, AIlah creates an immersive experience, his camera evincing the same roving, honest gaze that made Field Niggas so captivating. This time, however, he tries his hand at more formal filmic conventions, employing a “three-trimester” structure (so-named to match his maternal thematic focus) to shape the arc of his story. (Though structural boundaries are more apparent here than in Field Niggas, solid bearings are no more attainable: to cite one example, the timeline marking footage of the filmmaker’s maternal grandfather—which spans from spirited conversations between the old man and his descendant behind the camera right up until the elder’s funeral— is unclear, but is somehow of little concern by the film’s end.) The film begins its first “trimester” by taking the viewer through oral tellings of Jamaica’s history as a country and a culture, prior to and through colonial devastation all the way up to all what Allah takes care to depict as an ambivalent present. The second trimester homes in on these contemporary societal dictives and tribulations, the filmmaker’s subjects offering candid ruminations on safety, vulnerability, and conditioning as Allah further develops his metaphorical conflation of woman and country. The third trimester affects a reset of sorts, in a contemplative passage that leans heavily on leavening spiritual rhetoric from two elders before quite literally reconciling the forces of life and death in the film’s final moments.

Permeating the film (and, by extension, Allah’s practice) is a sense of Black critical memory: implicitly racial discussions on skin bleaching, the violent colonial installation of Christianity, and suspicion toward cultural outsiders are woven throughout the text, as much matters of consideration for the director as they are for his subjects. Wide-ranging though these topics appear to be, it becomes evident that Allah regards them as vital parts of a whole: where portraiture is concerned, entirety and wholeness are of chief value. Allah’s tendency toward the monolithic extends to language: the film’s title itself — like Field Niggas, which makes reference to Malcolm X’s infamous Black American slavery-era taxonomy — harkens to prescriptive and definitive aspirations, seemingly concerning itself with ontological considerations.

Preceding considerations of method is a much simpler consideration: the filmmaker himself, as a person. Objective history (if such a thing can be said to exist) is important to the narrative insofar as it informs Allah’s worldview, but Black Mother ultimately reveals itself to be more reflective of subjective memory than history. It’s this undeniable personal touch, alongside a propensity for direct address and a palpably earnest desire for an essential understanding of each of his subjects, that move Allah’s practice away from something resembling ethnography and closer to portraiture-as-(auto)biography. Allah’s insertion of himself and his process into the final film is testament to this: an adventurousness in construction, incorporating different formats (Super 8, VHS, HD) across varied source material; a clear reverence for and candidness about craft, leaving frame lines and sprockets in the visible field for aesthetic value; third-person shots of the filmmaker himself at work, hand-cranking a Bolex. It’s clear that, to Allah, creation is beautiful, and indeed the entire film is, in its way, reverent of creative force; that it ends with prayer over the filmmaker himself, always at centre, and then a literal birth, is par for the course.

Inseparable from a work this personal are the creator’s own idiosyncrasies, for better or worse. From Black Mother‘s three-trimester structuring to extended rhetorical passages touching on ideas of respectable womanhood, the film often skirts a distracting gendered essentialism. Adaptations of maternal mythology therein are heavy-handed, unheedingly conflating the feminine with nature, and one wonders if a certain naiveté tips the scale on Allah’s well-intentioned assessments toward hagiography and flattening. It’s this decidedly gendered solipsistic tendency that carries the risk of shutting out complexity and subjectivity in favour of iconographic and symbolic projections that are of far more import to the beholder than the beheld.

These are surely potential points of alienation for some viewers, but they are made in earnest. The personal investment that begets Black Mother‘s weaknesses also bears its greatest gifts. The curiosity that grounds Allah’s lines of inquiry is profound, and it’s relational and dichotomous dynamics that he appears to be most interested in, demonstrating a clear penchant for locating and examining points of engagement: business transactions, courting rituals, and hegemonic power are evident preoccupations. Among the most compelling of his makeshift case studies are the most personal: the ongoing reconciliation of Jamaica’s religious and spiritual climates — in the film, largely Christian — in light of Allah’s own spiritual base in the Five Percent Nation; the filmmaker’s unaffected interest, as a light-skinned, multi-racial Black man with Iranian paternal ethnic heritage, in the phenomenon of skin bleaching; his childlike wonder at the machinations of the street market as he eagerly goads his subjects to perform their best sales pitches for posterity.

It’s tempting to measure Black Mother against the equally monolithically-named notion of “Black cinema.” Just as the film’s narrative expresses something much more subjective and personal than its title would suggest, the filmic form, too, is created in Allah’s own image. There exists a rich lineage of Black life documentation by Black artists, and moving image work is seeing its own luminaries emerge rapidly from within these traditions (Allah’s fellow Lemonade collaborator Kahlil Joseph is often named as a key multidisciplinary, portrait-inspired contemporary); the work of Khalik Allah holds its own in any case, owing to the innovative drive of a creator dedicated to seeing anew. Black Mother presents a mode of moving-image portraiture that feels singular in the context of contemporary film, a revelatory offering worth grappling with in spite of any ideological drawbacks. Innovation, as it turns out, is the mother of ideas.

Thanks to Zia Anger and Doreen St. Félix, whose insights were invaluable to my thinking on the film.