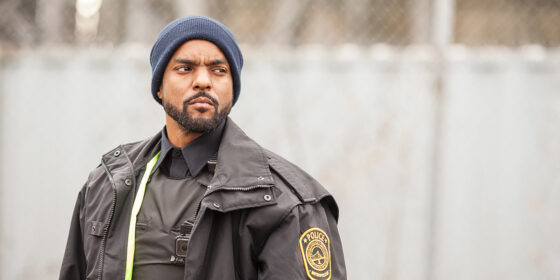 The inciting central incident in Cory Bowles’ debut feature is an all-too-recognizable altercation between two belligerent, white Toronto PD officers and a hoodie-wearing black man (Ronnie Rowe Jr.) leaving a convenience store mid-run. Starting with the officers’ quasi-congenial attempts to get the jogger’s attention while his earbuds blare, a tumult of racially charged miscommunication ensues. The escalation is entirely due to the officers’ wilful interpretation of the man’s defensive manoeuvring—his refusal to provide a name, his call for them to stop boxing him in, his demand that one of the faceless officers remove his hand from the holster on his right hip—as a form of aggression.

This same scenario will play out multiple times over the course of Black Cop, but with one crucial and consistent caveat: the jogger, who is also a Toronto police officer, patrols upper-class neighbourhoods and tickets and tazes its affluent white residents. This police violence is preserved in the rough format with which we’re typically exposed to these images: cell-phone recordings, dash-cam footage, and video from a Go Pro attached to Black Cop’s (we never do learn his name) bulletproof vest.

The transgressive premise, without the orientation of the first act’s framing and the third’s revelations, could affirm the beliefs of tiki-torch-bearing skinheads and racial activists in equal measure. The emotionally loaded scenario—an institutionally-backed black perpetrator abusing his powers against “innocent” white victims—is, in itself, neutral. The problem is that the film appears to defend its protagonist’s reasons for joining the force while affirmatively depicting his arc from complacent bystander to participating activist through the two Black Lives Matter rallies at the beginning and end of the film, one in which he’s on duty and the other in which he’s a supporter. For all its visceral images, the film’s raw power isn’t matched by equally provocative ideas.