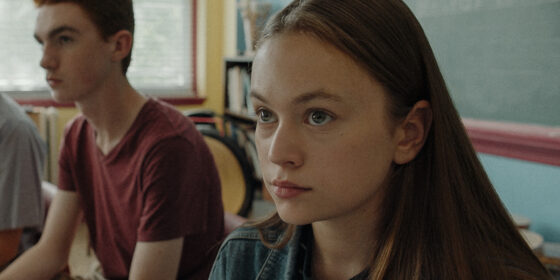 A “conflux” or confluence is the juncture where two rivers meet, seamlessly connecting into a single body. This convergence becomes a recurring visual motif in Nicole Dorsey’s small-town coming-of-age story set in 1980s Newfoundland, a portent of the coming collision between its two main characters, teenage Jackie (Ella Ballentine) and intense loner Dennis (Ryan McDonald). The pair occupy completely separate stories within their East Coast town: while Jackie experiments with alcohol, shoplifting, playing hooky, and generally testing her boundaries as adulthood looms, Dennis grapples with his own arrested development (“incel” is perhaps too cruel a pejorative to apply here, but toxic masculinity has certainly stunted his ability to view women as anything other than objects to be both feared and desired).

Working with cinematographer Marie Davignon, Dorsey (an accomplished short filmmaker) has crafted an impressively cinematic debut feature; an excellent dance sequence set in a local watering hole is a highlight, calling to mind similarly cathartic moments in Claire Denis’ Beau travail. Where the film falters is in its script, which feels like a rough draft in need of a much stronger edit. Black Conflux shines when it shows, less so when it tells: having one of its main characters plainly lay out the themes of the film undermines the far more compelling ambiguity evoked by the visual storytelling. Nevertheless, Dorsey is clearly a filmmaker to keep an eye on in future.