The Birth of a Nation (Nate Parker, US) — Special Presentations 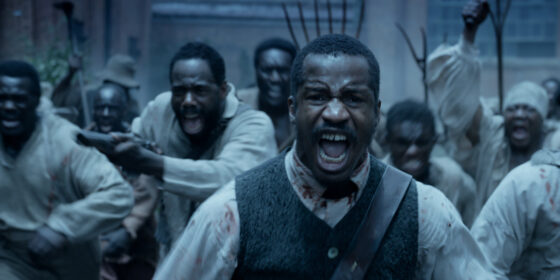 Let’s stick to what’s on screen here, and say that Nate Parker isn’t the first multi-hyphenate to conflate artistic megalomania with authentic heroism—a pre-damage control Mel Gibson got an Academy Award for it, for instance. At the risk of praising with faint damnation, The Birth of a Nation is roughly on a par with Braveheart (1995) as far as gory populist epics go. This genre has defeated the filmmakers who have tried to bridle against or reinvent it; by contrast, Parker strives shamelessly to inhabit a banal format head-on. By casting himself as the insurrectionist preacher Nat Turner, who torqued his sermons to lead several Virginian plantations’ worth of slaves against their masters in the early 19th century, the filmmaker ensures that his ostensible homage is also a star vehicle. Parker the director gifts Parker the actor with huge, screen-filling close-ups and rousing, scripture-driven speeches, while the other performers barely seem to have been guided at all. (Playing Turner’s hard-drinking, guilt-stricken master, Armie Hammer at least attempts some semblance of complexity, whereas Jackie Earle Haley contributes a cartoon of racist villainy.) Bereft of either Steve McQueen’s formalist rigour (the stabs at expressionism, like a bleeding ear of corn, are dismal) or Quentin Tarantino’s faux-retrograde craziness (gotta give Django Unchained [2012] that, if nothing else), all Parker can do is haplessly transform a vital, unsettling and, yes, contemporarily resonant episode in American history into an unfortunate string of clichés. It’s very strange to watch painful verities staged in a way that diminishes their power under the guise of amplifying it. This is a film about deep-seated systems of oppression that feels tonally like a superhero origin myth. The cynicism that rationalizes such a hard-sell approach as a necessary tactic to make difficult material palatable for mainstream audiences is something to be very wary of indeed.