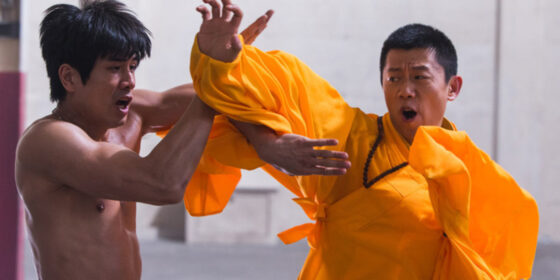 When it comes to biopic treatment, everybody deserves better. But this is especially true for Bruce Lee, who left behind a rich and varied filmography, lest we forget—by my lights, the drinking sequence in The Big Boss (1971) is as termitic a portrayal of shit-facedness as the movies have offered, facing competition only from Raul Ruiz’s Tres tristes tigres (1968) and maybe Ted Kotcheff’s Wake in Fright (1971). Point being, if forces of darkness have inevitably aligned to make a new Bruce Lee biopic, you’d be blameless for imagining an end product more nutritious than George Nolfi’s Birth of the Dragon, a film-adjacent work plainly orchestrated to squeeze a few million dollars more from the deceased martial-arts star’s visage, carried this time by actor Philip Ng, who does a competent job with a beyond-ignominious screenplay. The year is 1964: a cornpone Indiana boy named Steve McKee (Billy Magnussen), recently relocated to San Francisco to find himself, finds himself drunkenly passed out in front of Lee’s martial-arts studio. When Lee wakes him up the next morning, his face is hidden by a cobalt-blue lens flare; and, since McKee is the film’s actual protagonist and therefore voiceover narrator, the moment is capped with a clanging “and that’s how I met Bruce Lee!”

Amir Mokri’s camera appears nervous, somehow, about facing up to this “Bruce Lee”: Ng is repeatedly drenched in fog and shadow, the frame playing up the verisimilitude of his haircut, the chiaroscuro of his cheekbones. The timbre of Ng and Magnussen’s performances would suggest that every single scene in Birth of the Dragon was shot on the first day of production (rehearsal optional), while the score is assaultive in its suggested epiphanies. Lee serves as little more than a vessel for depressing one-liners and zen-calendar axioms which, if consistent with characters the real Lee would play in talkier works, sublimate any human-adjacent inquiries in service of so much foot-dragging exposition and fire-sale iconography. Cardboard and clueless, McKee isn’t just a hapless bystander: the concoction of his character points to the cold market reality of this motion picture’s US-Chinese co-financing ploy, which confirms that all a movie really needs to get greenlit are the keys to some pre-established name/face/property. Wherein the putative sell—a showdown between Lee and Shaolin master Wong Jack Man (Xia Yu) that changed the young master’s style forever, don’t ask how—takes forever to arrive.