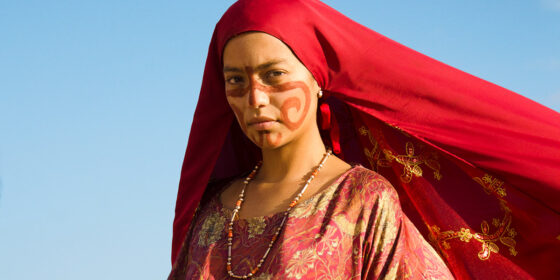 In Embrace of the Serpent, director Ciro Guerra and producer Cristina Gallego demonstrated an all-too-rare talent for finding an original visual language that fit and enhanced their subject matter. The black-and-white cinematography, while beguiling, stripped their representation of the Amazon jungle of the exoticism that is so often associated with it, depriving the colonizer’s eye of the bright colours that he so cherishes and can’t find at home. By representing the jungle in various shades of grey, the film underlined its physicality, and thus its existence beyond appearances—the sense that it exists in and of itself, even when the white man isn’t looking at it.

Birds of Passage is also about the corruptive power of capitalism, but functions on different visual terms: the colours here are vivid and bright. At first, they underline the striking beauty of Native American Wayuu traditions, but the richer our hero Raphayet (José Acosta) gets, the more garish and empty they seem. As Raphayet and his family become increasingly involved in the illegal Colombian drug trade, their Wayuu traditions become distorted, vacuous rituals that only lead to death and sorrow. Set across several years in the ’70s, Birds of Passage is an epic and wholly original take on the cartel genre, a critique of capitalism that gains in depth and emotion by daring to begin from a place that isn’t simply outside of drug violence, but of capitalism itself.