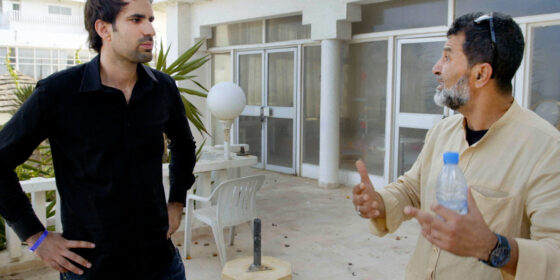 Dutch filmmaker Alex Pitstra’s mother Anneke, trying to bounce back from a bitter divorce, vacationed in a Tunisia beach resort in the late ’70s, where she met and fell for local playboy Mohsen Ben Hassen. Together, back in the Netherlands, they had little Alex, soon after she had learned that Mohsen was a common thief. Mohsen was kicked out of the country, but later won over another vacationing woman from Switzerland, with whom he fathered Jasmin Ameera. He was kicked out of Switzerland, too. Now in his early 60s, Mohsen has three grown children by three different women.

Alex decides to make a personal documentary, titling it Bezness as Usual, about how he tries to learn about himself by reuniting with and understanding his father. He ultimately realizes that the relationship is transactional, involving, in the Tunisian parlance, “bezness.” After meeting Alex several times, Mohsen expects his eldest son to provide for him, everything from the cost of dental services to a buttermilk machine for his tiny food stand. The poor progenitor sees his European son as an ATM machine.

The most telling aspect of this not very interesting piece of self-portraiture is how it raises the notion that Alex will be making money off of the movie we’re watching, and isn’t it fair for Mohsen to get some of the proceeds? Of course, this movie may or may not make much money from territorial film sales to TV networks, but the sense that a dad with a shady past is still calculating what he can get off his son—even while the dad is professing to be a loving parent and a fervent Muslim—makes for a complicated relationship. Jasmin, to her credit, sees right through him and will have none of it. Alex, for reasons he never articulates—which is why the film finally fails as a self-study—just can’t say no.