Beyond the One (Anna Marziano, France/Italy/Germany) — Wavelengths 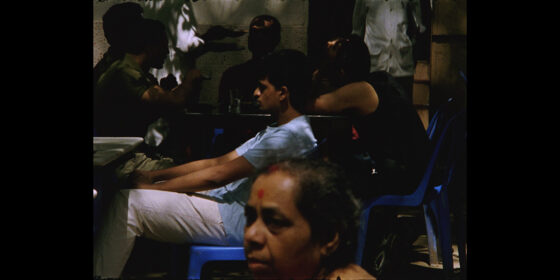 One of the main images that reappears throughout Anna Marziano’s new film is a shot out of a moving train window, that of a thicket of trees racing by in a blur. Although this type of shot is something of an avant-garde staple, there is something truly unique about the way Marziano employs it. The jumble of trees has a golden brown glow to it, with deep black lines defining the negative spaces in a kind of undulating skein. The shots resemble Brakhage, but they have a quality all their own and are unexpectedly striking. It’s only about midway through Beyond the One that we realize that these trees are a visual pass code to the film’s major theme.

Marziano has made a short essay film about the various forms that love relations can take, separate from the dominant ideology of the nuclear family and, in particular, the monogamous romantic couple. Her subjects, like those trees, are independent entities, but they have chosen to meld and intertwine with one another in a continual process of making and unmaking. In Beyond the One, human relationships are fundamentally Bergsonian, defined by time and energy but never oppressive in their solidity.

As Marziano jumps quickly among her various interviewees and their own romantic choices—polyamory, communal family living, single motherhood, long-distance relationships, open marriage, and many more—she shows us that sometimes the decisions are political, and other times merely driven by unconventional desires. Unlike more didactic films on similar subjects— Monika Treut’s Female Misbehaviour, for example—in Beyond the One Marziano is content to wonder at the sheer plenitude before her. As one woman says in the film, “each person has a form of love.” This film is an homage to that everyday audacity.