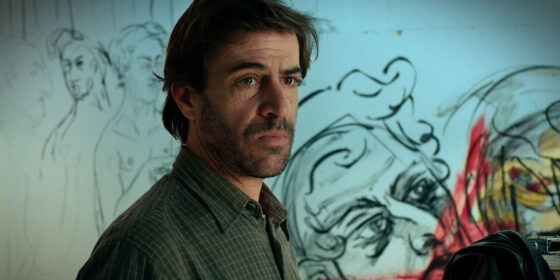 If there’s a film this year that merits the label “Big Dick Energy” more than Belmonte, it’s going to have to be in Cinerama. This is the story of Javi Belmonte (Gonzalo Delgado), a leading contemporary artist in Uruguay whose large canvases exhibit a hint of Italian Transavantgarde style (especially Francesco Clemente) but are especially notable for their priapic proportions. “Why do you always paint naked men?” Belmonte’s daughter Celeste (Olivia Molinaro Eijo) asks her dad quite earnestly, to which he replies, “Because I’m a man.” (Understandably unsatisfied, she demands, “But why are they naked?”)

This is a film about a man at a crisis point in his life, but what makes Belmonte rather unique is the fact that, at least for most of the film, it avoids the clichés of the creative life. Instead, Veiroj treats art as labour, coextensive with the demands of fatherhood and other familial duties. We see Belmonte dealing with his elderly parents, furriers who refuse to back away from the family business. And in his dedication to Celeste, Belmonte maintains a close relationship with his ex-wife (Jeannette Sauksteliskis), which is difficult because he still carries a torch for her, despite her remarriage and pregnancy.

Veiroj is Uruguay’s leading auteur at this point, and as with his earlier film A Useful Life (which centred on a cinematheque programmer), Belmonte is a sensitive examination of the ins and outs of a life in the arts. Belmonte is preparing for a museum retrospective, working on the catalogue, previewing the video interview that will be looped in the gallery— all really glamorous stuff. But Veiroj saturates Belmonte with vibrant colours: the painter’s candy-apple red vehicle, skies of lilac and cobalt blue, and pink/orange reflections on Belmonte’s face during his frequent trips to the symphony. The artist’s ordinary world is visually alive, so much so that he does not need to sequester himself from mundane tasks. Despite an ambivalent ending, which sees a partial retrenchment into Felliniesque masculinism, Belmonte is a film about a male artist who values his family life as much as his art, if not more. It’s not only refreshing: it’s genuinely sexy.